« The WAGER, Vol. 22(6) – Gambling among the faithful | Main | Introduction to Special Series on Addiction among the LGBTQ+ Community »

The DRAM, Vol. 13 (6) -- Leave no one behind: Understanding problem drinking among veterans

Reports by journalists as well as research studies have taught us that American veterans returning home after their service often find it difficult to transition back to civilian life. Some estimates suggest that for every four returning veterans you meet, one of them is likely to report having symptoms that are consistent with Posttraumatic Stress Disorder (PTSD). Researchers have also found that, for veterans, combat experience and PTSD are linked to higher rates of alcohol use and problems. In this week’s DRAM, we review a study by Stephen M. Miller and colleagues that investigates the pathways that lead from combat exposure and PTSD to alcohol problems in veterans.

The study relied on data collected as part of a larger longitudinal study that employed Facebook to reach veterans. Veterans of the Air Force, Army, Marine Corps or Navy between ages 18 and 34 (N=312) participated in the study. The authors gathered data on combat severity, PTSD symptom severity, frequency of drinking for coping reasons, perceived stigma of behavioral health treatment seeking, and adverse consequences participants attributed to their drinking in the past 30 days. They then used a path model to analyze the relationships among these variables.

The authors found that drinking to cope and perceived stigma of seeking treatment mediated the relationship between PTSD symptoms and adverse alcohol consequences. In other words, veterans with greater PTSD symptom severity were more likely to drink as a way to cope (for example, to forget about their problems), as well as to view receiving treatment as something negative. Further, among veterans with greater PTSD symptom severity, both perceived stigma of seeking treatment and drinking to cope predicted higher negative alcohol-related consequences. (Please see Figure 1).

The findings suggest two specific avenues for intervention that will help veterans experiencing PTSD to recover and avoid further adverse consequences as civilians. Firstly, programs targeted towards veterans that raise awareness about the nature of PTSD and appropriate resources to deal with it will help them avoid turning to alcohol in order “to forget.” Secondly, educational programs that combat the stigma associated with behavioral health treatment seeking will benefit veterans. While we know that such stigma exists in the general population, studies have shown that the phenomenon is especially acute in the military population. Programs designed to discredit the notion that seeking treatment for a disorder or disease makes one “weak” will help veterans.

In the study, after providing their initial responses, participants were followed up after one month. Other studies that follow-up on participants after a longer time horizon will help provide further confidence that the relationships found in the study don’t vanish after a short duration. Also, as the study relied on a self-reported measure of PTSD, we cannot be sure how well it conforms to a clinically administered measure – future studies that rely on the latter criteria will be instructive. 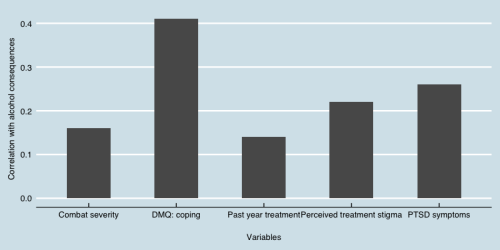 Are you a veteran and are having problems with alcohol or drug use? Please visit the Veterans Alcohol and Drug Dependence Rehabilitation Program.

Posted at 08:19 AM in The Drinking Report for Addiction Medicine (DRAM) | Permalink