ASHES, Vol. 13(6) - Where there’s smoke: LGB young adults' use of other tobacco products

Lesbian, gay, and bisexual (LGB) individuals are more likely than heterosexual individuals to smoke and use other tobacco products. Although acceptance of so-called sexual minorities has increased in recent years, coming out to friends, family, and coworkers can still be stressful. When LGB individuals are rejected by those they know, it can lead to an increase in both substance use and later substance misuse. This week, as part of our Special Series on Addiction among the LGBTQ+ Community, ASHES reviews a study by Fallin-Bennett and her colleagues that dives deeper into tobacco and nicotine use among LGB individuals by exploring gender differences.

Do young adults who frequent bars and identify as LGB use cigarettes and other tobacco products (OTP) such as cigarillos, e-cigarettes, hookahs, chew, and snus more often than heterosexual young adult bar patrons?

The researchers used a cross-sectional study design to survey 8,010 young adult bar patrons in seven US cities. Among this sample, 1,101 participants identified as LGB. Participants answered questions about their demographics, including gender and sexual orientation, as well as their past 30-day use of cigarettes and OTPs. The researchers used logistic regression to examine how sexual orientation and gender relate to past 30 day use of tobacco products other than cigarettes.

As the Figures show, both women (1a) and men (1b) LGB bar patrons have increased odds of being OTP users compared to heterosexual bar patrons. The greatest increases in odds were for snus, cigarillos, and dual use of cigarettes and an OTP. Female and male bar patrons who identified as lesbian, gay, or bisexual were much more likely to use snus, cigarillos, or report dual use of cigarettes and an OTP than their heterosexual counterparts. These findings held even when the researchers controlled for demographic factors such as age, race/ethnicity, and education. 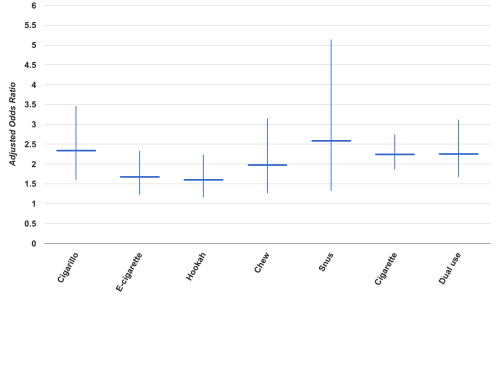 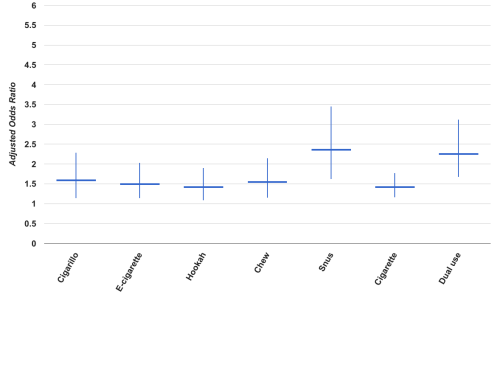 Note. All findings were statistically significant. The horizontal bar is the adjusted odds ratio and the vertical line is the confidence interval. Odds ratios greater than 1, shown above by the dotted line, indicate higher risk compared to heterosexual bar patrons.

In the past 25 years, tobacco control advocates have made great strides in reducing the prevalence of tobacco smoking, the source of the largest preventable cause of disease globally. During that same period, specific populations including, the LGB community, have continued to smoke cigarettes and use tobacco products at rates higher than the general population. The results from this study highlight the need for states to expand smoking bans at bars and restaurants to include other forms of tobacco. There’s also an opportunity for cessation efforts targeted towards the LGB community that focus on the dangerous effects of  the use of OTP and dual use of OTP and cigarettes.

There are two important limitations, First, the study did not measure why LGB bar patrons chose to use OTP. So although we know there’s an increased risk, we do not know from this study what is causing it. Second, the study sample was selected from bar patrons, meaning the results might not describe OTP use among the broader LGB community.

If you are concerned about yours or a loved one’s nicotine use, visit our resource page for brief screens to assess tobacco and other substance use and self-help tools.