« ASHES, Vol. 13(6) - Where there’s smoke: LGB young adults' use of other tobacco products | Main | STASH, Vol. 13(6) – When the solution is part of the problem: Illicit drug use amongst transgender and gender nonconforming individuals »

Editor’s Note: Professor Kimberly F. Balsam of Palo Alto University authored this op-ed as part of our Special Series on Addiction within the LGBTQ+ Community. Professor Balsam serves as Director of the LGBTQ Area of Emphasis and Co-Director of the Center for LGBTQ Evidence-Based Applied Research (CLEAR) at Palo Alto University. She is also the President of APA’s Division 44 (Society for the Psychological Study of LGBT Issues).

“Are you married?  What does your husband do?  What did you do this weekend?”  All of these are seemingly innocuous questions, unless you have to come out about your sexual orientation to answer them.    Do I keep the topic neutral?  Come out and wait to see their reaction?  And if confusion or disapproval are evident on their face, what do I do next?  This internal dialogue is familiar to many LGBTQ people, and for those who are transgender or gender nonconforming, additional challenges must be navigated in daily interactions.  Indeed, “minority stress,” the additional stress burden associated with being a member of a minority group, is linked to mental and physical health problems, including substance abuse.  Understanding how minority stressors affect LGBTQ individuals, couples, and families has been the central focus of my career as a clinical psychologist for the past two decades. 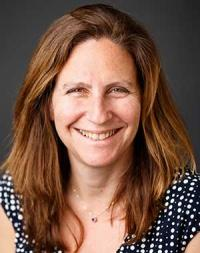 My interest in this work is not just academic.  In 1994, as a 27 year-old young adult, I finally came out to myself and the people around me.  Suddenly, I found myself approaching seemingly neutral situations, like talking to the person next to me on an airplane, with trepidation.  I had taken Women’s Studies classes, and I was already aware of how sexism impacted my life and choices as a woman.   Still, being White and from a middle-class background, I had not yet known what it was like to experience the type of prejudice that so many others contend with on a daily basis.  Sitting next to a stranger on a plane was one of many daily interactions that suddenly was imbued with uncertainty.  I was deeply curious about how other LGBTQ people experienced such challenges and how they were affected by them.

My interest in LGBTQ health research also stemmed from my early career experiences doing clinical work with trauma survivors, many of whom struggled with substance use and addiction.  As my own public identity as an LGBTQ person became known, I began to draw more clients to my practice who were also LGBTQ.  It was striking to me that so many of these clients had experienced traumatic violence such as childhood sexual abuse, rape, and bullying at school, all against a backdrop of the daily stressors of being in a minority group.  Additionally, I noticed how the prevailing societal stereotypes – that abuse “makes you gay” – made the road to recovery and healing even more challenging for these clients.

Drawing from my own and my clients’ experiences, I began conducting research on LGBTQ health 1997 and decided to return to school for my doctorate.  My dissertation research focused on trauma and its aftermath, including mental health problems and substance abuse, among lesbian, gay, and bisexual people compared to their heterosexual siblings. After graduating in 2003, I obtained funding from NIH and private foundations to continue to pursue research on trauma, minority stress, and their role in driving the health disparities experienced by LGBTQ people.  My research over the past 20 years has included paper questionnaires, online surveys, focus groups, and in-depth interviews.

One of the most-often discussed disparities experienced by LGBTQ people is their relatively higher rates of using and abusing substances.  These disparities have been linked, in my own research and that of many others in health-related fields, to the relatively higher rates of trauma and victimization as well as the unique minority stressors associated with gender and sexual identity.  Additionally, there are other aspects of the LGBTQ community that may enhance risk for substance use and addiction.  For many years, “gay bars” were one of the only identified places where LGBTQ people could socialize and meet others in the community.  Thus, in the context of a homophobic and transphobic society, social norms developed that made substance use seem more “normative” and linked to LGBTQ identities.  Indeed, in my interviews with LGBTQ research participants, I heard them talk about their sense of a collective LGBTQ identity that is outside of all societal norms – including norms regarding sexuality, gender identity, and use of substances.  This, unfortunately, was picked up on by alcohol and tobacco companies, resulting in targeted marketing efforts to LGBTQ people.  In one of my studies using state-level health data, I found that LGB people’s exposure to targeted tobacco marketing played a role in explaining their higher smoking rates.

My career in psychology research with LGBTQ people has spanned a period of dramatic social change for LGBTQ people.  In 1997, same-sex couples could not legally wed in any U.S. state, and more than half of all U.S. adults thought that they should not be able to. Service members were routinely discharged from the military for violations of the “Don’t Ask, Don’t Tell policy.”   Ellen DeGeneres was just paving the way for LGBTQ visibility in the media.  Most psychological research did not ask about sexual orientation or gender identity, and researchers were afraid that doing so would make research participants overly uncomfortable.  And research that did include LGBTQ people typically focused on White gay men and lesbian women, leaving bisexual, transgender and LGBT people of color in the margins.  In contrast, in 2017, same-sex couples can obtain a marriage license in all 50 states and attitudes of most U.S. adults have become more supportive and open-minded.  Openly LGBTQ people can serve in the military alongside their heterosexual and cisgender counterparts.  Visible LGBTQ celebrities and storylines can be found throughout the mainstream media. Data on LGBTQ people has been collected in large national health surveys, the U.S. census, and in numerous behavioral and health disciplines.  And research is increasingly addressing the needs of more diverse LGBTQ people, including bisexual, transgender and gender nonconforming, and people of color.

And yet, our work is far from done.  The tragic massacre at an Orlando nightclub in June, 2016 reminded us of the very real risks of violence that LGBTQ people face on a daily basis.  And a political backlash has been underway since the Supreme Court marriage decision in 2015 that has intensified after the 2016 elections.  More than 100 new anti-LGBTQ legislative bills have been introduced across the country in 29 states, bills which threaten to undermine LGBTQ rights in the areas of access to services, parenting, mental health care, and the ability to use the bathroom aligned with one’s gender identity.  Plans are underway at the federal level to remove LGBTQ identities from the 2020 census and other surveys related to health and demographics. Internationally, LGBTQ people are facing increasing threats of violence and even detention based on their sexual orientation and gender identity in some parts of the world.   Everywhere, health disparities between LGBTQ people and their heterosexual and cisgender counterparts remain, and are at risk of widening in the face of discriminatory policies and barriers to healthcare and substance abuse treatment access.

The recent progress and backlash in LGBTQ communities have highlighted the crucial importance of taking an intersectional perspective on LGBTQ health.  We cannot understand LGBTQ people without also understanding the complex ways in which their experience is shaped by their race, ethnicity, immigration status, socioeconomic status, disability status, age, geographic location, and other important aspects of identity.  It has become clear that the progress we have experienced in society has disproportionately benefitted those who are more privileged in society, and that the backlash has disproportionately affected those who are more vulnerable.  Moving forward, researchers in LGBTQ health must do a better job of including this intersectional perspective in our research questions, research design, and interpretation of our results.  We must step up our efforts to disseminate our research results to our communities, and to use these findings to inform policy, program development, and clinical practice so that LGBTQ individuals and communities can benefit from our empirically-informed perspectives.

It has been an honor to devote my career to studying LGBTQ health.  From my beginnings as a curious young adult who was afraid of talking to a stranger on a plane, I find myself now at midlife in roles as a leader in LGBTQ communities and a mentor to rising LGBTQ researchers.  My research over the years has opened my eyes to the tremendous resilience and strength of LGBTQ people and has deepened my compassion for the struggles that we have endured and continue to face.   And perhaps most importantly, I have become even more committed as an ally to people across difference, using the tools of research to light my path.

Posted at 10:14 AM in Op-Ed/Editorials, Special Series | Permalink