« STASH, Vol. 13(6) – When the solution is part of the problem: Illicit drug use amongst transgender and gender nonconforming individuals | Main | The DRAM, Vol. 13(7) – Extra walls: GLB individuals and additional barriers to alcohol treatment »

The WAGER, Vol. 22(7) – Mental health and sexual orientation among people with Gambling Disorder

Although people who identify as LGBTQ+ have higher rates of mental health and substance use problems, which are risk factors for Gambling Disorder, few studies have examined how mental health, gambling, and sexual/gender identity intersect. In 2006, Jon Grant and Marc Potenza conducted the first and only study to examine the relationship between mental health and sexual orientation among a sample of people seeking treatment for gambling problems. This week, as a part of our Special Series on Addiction among the LGBTQ+ Community, The WAGER reviews their study.

What is the relationship between psychiatric comorbidity and sexual orientation among a sample people seeking treatment for gambling problems?

Of the 105 male gamblers, 15 identified as gay and 7 identified as bisexual. Gay/bisexual men were more likely than other participants to have a lifetime or current impulse control disorder. Gay/bisexual men also reported higher rates of substance use, impulse disorders and greater impairment in their daily lives (Figure 1 & 2). The figures below only reflect some of the psychiatric disorders that were assessed in the study.

The mechanisms of addiction are complex, yet there is evidence that mental health is a cause and consequence of addiction. These findings suggests that gay/bisexual males with gambling disorder may be struggling wider range of problems than heterosexual men. This should motivate gay/bisexual men, as well as others with gambling-related problems, to seek treatment for additional mental health problems.  The LGBTQ+ community seems to be a population that is at-risk for problems with mental health and addiction; therefore, public health research should be devoted to assessing both sexual orientation and problems with gambling in a more standardized way. 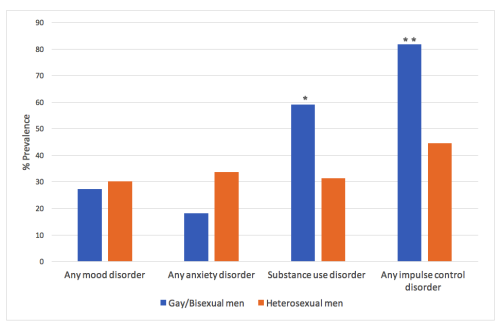 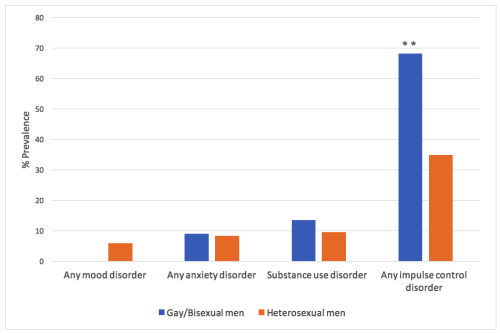 The sample for this study was made up of individuals who were already seeking treatment. Only a minority of people with gambling problems seek treatment for those problems; therefore, the psychopathology of people seeking treatment may not reflect the general population of gamblers. Additionally, the researchers created categories for mood, anxiety, and substance use disorders by combining multiple related disorders. Because the disorders in these categories (i.e. generalized anxiety, bi-polar disorder, alcohol use disorder) can interact with addiction in different ways, for treatment purposes it would be helpful to identify specific disorders.

Worried you or a loved one has a gambling problem? Check out the National Center on Problem Gambling for screening tools and resources.

Good question. This study only included men. We agree that more research is needed in this area, especially research including women.

Thanks for reading The BASIS.

I agree wholeheartedly that more research is need in these areas. I am a Disordered Gambling provider in Michigan. I have noted that over the past 10 years, a significant number of clients have been male gay as well as female gay. Common denominators appeared to be utilizing the casino as both an escape from the reality of the outside world and as a place where they felt they could be accepted regardless of their sexual preferences but just simply because they had money to spend. The casino appeared to be a place where everyone is welcome and treated equally--non-judgmental environment--where they could just relax and be themselves. Therefore, they are more likely to go more often, more apt to spend more money, more apt to lose more money, more apt to develop an addiction.