ASHES, Vol. 13(7) – Child cognitive ability and smoking in adulthood: Does education also affect the ability to start and stop?

Children with relatively low IQ levels are more likely than others to take up smoking as adults; they also have a harder time quitting. Can education break this cycle?  This week, ASHES reviews a prospective study by Michael Daly and Mark Egan examining the relationship between childhood intelligence, lifetime educational attainment, and adult smoking behavior.

What is the relationship between child cognitive ability and smoking behavior in adulthood, when accounting for educational attainment?

The authors analyzed data from 16,653 individuals involved in two separate birth cohort studies: the 1970 British Cohort Study the 1958 National Child Development Study. Using probit regression, they examined the association between cognitive ability at ages 10  and 11 and self-reported smoking behavior (including initiation and cessation[1]) throughout adulthood.[2] They also examined whether participants’ highest level of educational attainment at age 23 and 26 mediated the relationship between childhood cognitive ability and adult smoking.[3]

The results of this study demonstrate that increased levels of educational attainment can at least partially explain why kids with relatively low IQ go on to smoke as adults; education seems to play a protective role, and kids with relatively low IQ get less education. These results highlight the importance of education in helping kids to avoid smoking in adulthood and improving their chances of quitting if they do smoke.

This study used self-report data, meaning participants could have lied about or exaggerated their smoking behavior. The researchers didn’t consider participants’ occupation, which is likely to be related to educational attainment. This is an important limitation given that the cultures of some occupations are more accepting of smoking than others.

Figure 1: Association between childhood cognitive ability on smoking outcomes (before and after controlling for educational attainment). Click image to enlarge 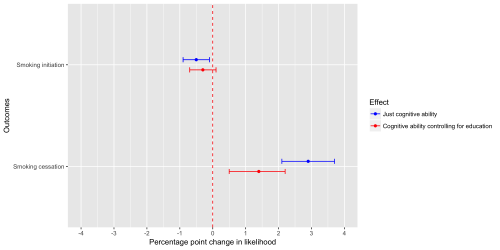 [1] The authors also studied relapse participants who quit smoking, but we do not present those results here.

[3] The authors also controlled for participants’ age, gender, social class, self-control, psychological distress, and which of the two studies they came from

What type of education had the most protective effect?

The authors measured education using the UK’s national vocational qualification levels (NVQ). They found that the highest level of education (NVQ-5, which includes postgraduate degrees such as Master’s and Doctorates) shared the strongest association with a reduced probability of taking up smoking and an increased probability of quitting.

Yet another proof of the importance and value of education! Yey! :)