ASHES, Vol. 13(8) – Daughters of mothers who smoke: Are they more likely to smoke during their own pregnancies?

The authors analyzed the birth records of 64,112 pairs of mothers and daughters who delivered a baby in Washington State from 1984-96 (mothers) and 1996-2013 (daughters). These birth records include information about maternal smoking. The authors examined the association between daughters’ prenatal smoking and mothers’ prenatal smoking. They also examined whether this association was affected by race, age, marital status, trimester of prenatal care initiation, number of prior births and pregnancies, daughters’ birth year, or daughters’ educational attainment.

Daughters of mothers who smoked during pregnancy were more likely than other pregnant women to smoke during their own pregnancies (see Figure). Exposure to smoking in utero was still a risk factor for smoking during one’s own pregnancy even when researchers controlled for the year the daughter delivered, her marital status and educational attainment, and the mother’s race and ethnicity. 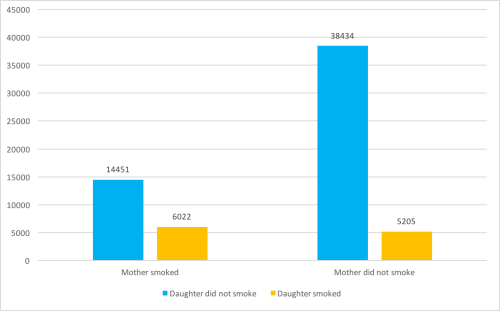 The results of this study demonstrate that daughters of mothers who smoked during pregnancy are more likely to smoke during their own pregnancies. Identifying this risk factor is the first step to intervening in this cycle of intergenerational smoking, and can help healthcare providers identify at-risk patients.

This study used self-reported data, meaning that participants could have misreported their smoking behavior. Furthermore, because these data were collected only from birth records, this study can’t draw conclusions about whether prenatal exposure to smoking or exposure throughout childhood (or a combination of the two) leads to the associations between mothers’ and daughters’ smoking behavior.