Editor’s Note: This op-ed comes from Dr. Heather Wardle, Assistant Professor at the London School of Hygiene and Tropical Medicine. It is part of our Special Series on Youth Risky Behavior. I remember the first time I gambled. I was eight and at my dad’s golf club. Whilst the adults chatted, I wandered off and found this amazing machine with bright lights, fruity symbols and fun music that gave me money when I put my coppers into it. Pressing buttons randomly, not knowing what to do, I was amazed when more money than I put in appeared in the dispenser... Read more →

ASHES, Vol. 13(10) – The relationship between e-cigarettes and youth smoking uptake

There is some evidence that e-cigarettes help people quit smoking. However, they have also been linked to taking up traditional cigarette smoking, particularly among young people. Whether e-cigarettes represent a public health (or harm) could depend on the overall extent of this relationship. This week, ASHES reports on a study by Samir Soneji and colleagues that examined the association between youth e-cigarette use, smoking initiation, and past-month cigarette use. This review is part of our Special Series on Youth Risky Behavior. What is the research question? Are youth and young adults[1] who have used e-cigarettes more likely to smoke traditional... Read more →

The DRAM, Vol. 13(10) – Are alcohol-related disparities between LGB and heterosexual youth decreasing?

Lesbian, gay, and bisexual (LGB) youth are more likely than their heterosexual peers to engage in risky alcohol behavior, including drinking at a younger age, drinking more often, and drinking more heavily. It’s likely that LGB kids are drinking more, in part, to cope with minority stress—the stress from being part of a stigmatized group. If so, we should expect to see that, as some communities have become more accepting of LGB people over time, alcohol-related disparities have also diminished over time. This week, as part of our Special Series on Youth Risky Behavior, the DRAM reviews a study by... Read more →

Posted at 10:49 AM in Special Series, The Drinking Report for Addiction Medicine (DRAM) | Permalink | Comments (0)

Editor’s Note: Professor Ryan J. Martin of East Carolina University authored this op-ed as part of our Special Series on Youth Risky Behavior. Dr. Martin serves as Associate Professor in the Department of Health Education and Promotion, College of Health and Human Performance. I have always been intrigued why people sought to be intoxicated. A part of that intrigue stemmed from reading about the lives of musicians and actors I grew up listening to and watching, some of which died at a young age from abuse of alcohol and drugs. Further, the D.A.R.E. (Drug Abuse Resistance Education) program was widely... Read more → 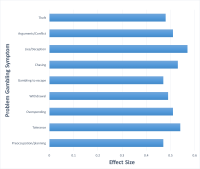 Social casino games (SCGs) combine online gambling-style games (e.g. slots, poker) with social media (e.g. Facebook). SCGs are free to play and therefore are not technically considered gambling. However, many games feature “paywalls” that either require a user to spend real money to continue playing or offer extra content that users can purchase with cash. SCGs might appeal to young people and might be associated with other gambling activity and gambling-related problems. In a 2016 study, Daniel King and his colleagues investigated the relationship between paying to play SCGs and gambling among Australian adolescents. As part of this month’s Special... Read more →

Posted at 09:59 AM in Special Series, The Worldwide Addiction Gambling Education Report (The WAGER) | Permalink | Comments (0)

STASH, Vol. 13(9) - For work or pleasure: What’s influencing non-prescribed stimulant use among US adolescents?

Non-prescribed stimulant use (NPSU) among adolescents is estimated to be 16.7% by age 18. Although, among college students NPSU is often used as a study aid for academic achievement, much less is known about the reasons younger adolescents engage in NPSU. This week’s STASH kicks off our Special Series on Youth Risky Behavior with a review of a study from Kenneth Leon and Dr. Daniel Martinez published in the Journal of Psychoactive Drugs, which examined risk factors associated with NPSU among middle and high school students. What was the research question? What factors predict NPSU among middle and high school... Read more →

Introduction to the Special Series on Youth Risky Behavior

During the month of September, most parents are preparing their kids for a new school year and anticipating the new people and situations their children might encounter. Along with these thoughts often come concerns about potential new threats to their kids’ well-being. As kids age and develop more independence, they have more opportunities to interact with potential objects of addiction, including both substances, like alcohol and cigarettes, and behaviors, like gambling. Here at The BASIS, we are dedicating the month of September to the topic of youth risky behavior. Our team of writers will distill four recent scientific studies related... Read more →