The DRAM, Vol. 13(10) – Are alcohol-related disparities between LGB and heterosexual youth decreasing?

Lesbian, gay, and bisexual (LGB) youth are more likely than their heterosexual peers to engage in risky alcohol behavior, including drinking at a younger age, drinking more often, and drinking more heavily. It’s likely that LGB kids are drinking more, in part, to cope with minority stress—the stress from being part of a stigmatized group. If so, we should expect to see that, as some communities have become more accepting of LGB people over time, alcohol-related disparities have also diminished over time. This week, as part of our Special Series on Youth Risky Behavior, the DRAM reviews a study by Jessica Fish and her colleagues examining changes in the differences in drinking behavior between heterosexual and LGB youth surveyed in 1998, 2003, 2008, and 2013.

The authors analyzed responses from four provincially representative cohorts of students (ages 12-19; total N = 99,373) from British Columbia who completed the British Columbia Adolescent Health Survey. Using these survey data, the authors studied the differences in lifetime alcohol use, age at first drink, past 30-day drinking, and past 30-day heavy episodic drinking between LGB and heterosexual youth, controlling for the respondents’ ages. They then examined how the drinking behaviors of LGB and heterosexual youth changed between 1998, 2008, and 2013.

Kids who identified as heterosexual reported less drinking from 1998 to 2013. However, the pattern was more complicated for LGB youth. LGB youth, especially girls, consistently reported more and earlier alcohol use than heterosexuals, and their rates did not decline steadily over time. For instance, as Figure 1 shows, more bisexual kids reported lifetime alcohol use in 2003, compared to 1998.

The finding that LGB youth continue to drink more and earlier than their heterosexual peers, even as youth drinking is decreasing overall, highlights the need for further research as to why this disparity has persisted over time. Further, this research demonstrates the need for alcohol prevention programs specifically addressed to sexual minority youth, who continue to be at greater risk of engaging in risky drinking behavior than their heterosexual peers.

These data are limited to a single Canadian province, and so may not reflect the experiences of youth outside of British Columbia. Furthermore, these data were collected exclusively from youth who were in school at the time of the survey, excluding youth who were not enrolled. Because sexual minority youth experience homelessness and school pushout at a higher rate than their peers, surveying kids outside the school system might reveal even greater disparities between LGB and heterosexual kids.

Figure 1: Lifetime drinking participation per year, as a function of gender and sexual orientation (adapted from Fish et al./2017). Click image to enlarge 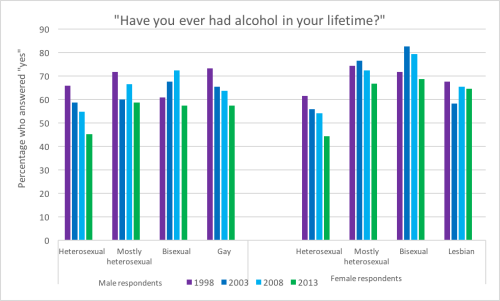 Posted at 10:49 AM in Special Series, The Drinking Report for Addiction Medicine (DRAM) | Permalink