STASH, Vol.13(10) - One size fits all? Extracurricular activities, substance use, and conscientiousness in adolescents

Early exposure to substance use during adolescence is tied to many negative outcomes later in life, including an increased risk of substance dependence. Adolescents who participate in non-sports extracurricular activities have been shown to be less likely to use substances than their peers. People who are more conscientious also are less likely to engage in risky substance use. So, could it be simply that these busy kids aren’t using drugs because they’re more conscientious than others? Kira McCabe and her colleagues tackled this question in a 2016 study. This week, STASH reviews their work.

Is involvement in extracurricular activities linked with reduced substance use for all teens regardless of their tendency for conscientiousness?

The researchers surveyed students at schools in Western Australia beginning when the students were in Year 10 (at an average age of 15 years old), and repeated this when the students were in Year 11 and Year 12. Surveys included questions about participation in extracurricular activities  and frequency of binge drinking, getting drunk, and illegal drug use in the past 6 months. The survey also included items from the NEO-PI-R questionnaire, which measures conscientiousness as a facet of personality. 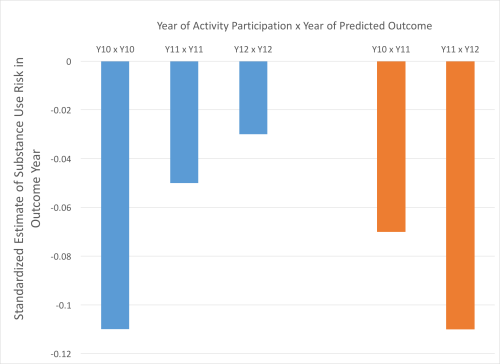 This study suggests that encouraging adolescents to participate in extracurricular activities might help protect them from engaging in risky substance use later on. More research is needed to determine what it is about participating in activities that might make teenagers less likely to use substances later in life.