« The DRAM, Vol.14(1) - A new treatment program for recently incarcerated homeless women | Main | What patients have taught me about addiction, homelessness, and society’s obligation to those living in the shadows »

US veterans are more likely than non-veterans to experience homelessness and to suffer from mental health disorders, especially post-traumatic stress disorder (PTSD). They are also more likely to smoke and experience tobacco-related health problems compared to citizens who have not served in the military. This week’s, as part of our Special Series on Addiction and Homelessness, ASHES reviews a study by Megan Kelly and her colleagues that examined the relationship between housing status and use of tobacco cessation counseling services among US veterans with PTSD.

Among veterans with PTSD and tobacco use disorder, how is housing status related to use of Veterans Healthcare Administration (VHA) tobacco cessation services?

The authors conducted a cross-sectional analysis of VHA administrative data representing 144,990 US veterans with PTSD and a tobacco use disorder from 2012. The researchers used logistic regressions, controlling for known confounders, to assess differences between US veterans with and without housing on use of tobacco cessation counseling services.[1] 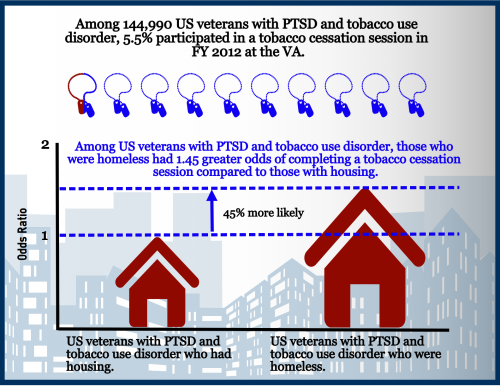 Among this sample of US veterans with PTSD and a tobacco use disorder, only a small minority participated in tobacco cessation sessions, but experiencing homelessness appeared to increase the likelihood of participation. This is likely due in part to the fact that veterans experiencing homelessness experience a wider range of mental health disorders than those with stable housing, which connected them to a wider range of VHA services. The findings of this study indicate an opportunity in the VHA system to integrate tobacco cessation efforts with PTSD services to increase the use of tobacco cessation services among US veterans who are not receiving other forms of treatment or support through VHA, including for homelessness.

This study used a cross sectional study design, meaning the researchers assessed both housing status and tobacco cessation services at the same time. This makes it impossible to examine if being homeless caused improved uptake of tobacco cessation sessions. All of the data is based on a review of medical records; therefore, it is plausible that a number of US veterans with both PTSD and a tobacco use disorder were excluded from analysis due to one or both mental health disorders being undiagnosed. Finally, US veterans might receive tobacco cessation treatment during other mental health treatment sessions at the VHA or cessation services outside of the VHA system, where in either instance that treatment would not be documented in their medical records.

Need help? Veterans can access a variety of resources for dealing with mental health issues here.

The SAMHSA website includes resources for homelessness and other issues.

If you or a loved one is struggling with tobacco use or other substance use disorders, please visit our addiction resources page.

[1] They defined homelessness in this sample as having used specialized VHA homeless services or having the appropriate ICD-9 code for homelessness in their medical records. The researchers defined tobacco cessation counseling services as those VHA patients who participated in at least one session of either individual group and telephone counseling services for tobacco use disorder.