When people discuss substance use, they often use slang terms that can vary over time and from place to place. Healthcare professionals, public health practitioners, and researchers are faced with the challenge of keeping up to date with emerging drug and drug-related terms. This week, STASH reviews a study by Sean Simpson and his colleagues that demonstrates the usefulness of a synonym detection computer program to identify newly emerging terms for drugs by analyzing Twitter content.

The researchers used a series of computer programs to gather and process data from 82.6 million randomly selected tweets that were written in English and located in the U.S. The purpose of the programs was to identify words or phrases used as synonyms for the common slang terms “weed” and “ganja.”  The authors then compared the terms identified by the synonym detection software with a list of slang terms compiled by experts in order to optimize the program’s precision1 and recall.2 This optimized computer program then generated a list of terms that human reviewers then double-checked.

The computer program identified 200 potential slang terms for marijuana. After reviewers vetted these terms, they determined that 50 referred to marijuana-related paraphernalia, and 65 referred to marijuana. When compared to the list of slang terms compiled by experts, 30 of the 65 marijuana terms were previously unknown. Interestingly, one of the new terms discovered was in fact a combination of emoji - 🍃🍃. 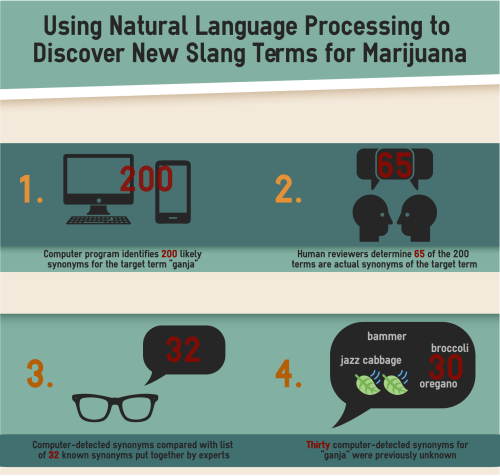 Figure 1. The author's process of identifying, validating, and evaluating potential new terms for marijuana. Figures in red indicate the number of terms considered at each stage of the process (modified from Simpson, Adams, Brugman & Conners, 2017). Click image to enlarge

The findings indicate that this specific technique has promise as a means of discovering new drug terms as they emerge, though further development is needed to reduce the number of false positives. A tool such as the one described could eventually be used without human oversight, speeding up the discovery and dissemination of not only new slang terms but new drug combinations and methods of ingestion.

In order to limit their sample of tweets to those emerging from the U.S., the authors limited their data to tweets that contained geotagged information. As geotagging a tweet is optional, this exclusion process might produce a sampling bias. In other words, users who discuss especially taboo topics might not geotag their tweets to maintain more anonymity, resulting in a sample that is less taboo than the population it’s intended to represent.

If you are concerned about your or a loved one’s marijuana use, consider Your First Steps to Change, a free anonymous self-help guide.

Posted at 11:26 AM in Science Threads on Addiction, Substance Use, and Health (STASH) | Permalink

As slang terms for drugs of all types tend to vary across geographical areas, I always tell the clinicians I supervise not to use them. If the therapist calls it "jazz cabbage," and the patient rolls on the floor laughing at them trying to "be cool," a loss of therapeutic credibility occurs.

I like Lisa Withrow's comment above. As one of the authors of the original article and a theoretical semanticist, I am very much aware of what the use of a particular word implies about the speaker's social identification.
The research team has attempted to do regional dialect analyses of these terms, but the data doesn't really lend itself to that kind of analysis. As we use different forums and methods for analyzing social media communications, we hope to refine the outcomes to be of greater utility to interested parties.