Online fantasy sports contests can be played over the length of a season, week, or even a single day, and they typically require entry fees or deposits. In paid competitions, similar to sports betting, fantasy sports players have a chance of winning money based on their performance. This begs the question of whether people who are deeply involved in fantasy sports might be more likely to experience symptoms of Gambling Disorder (GD) - a question that is all the more important as online fantasy sports gain more popularity. This week, as part of our Special Series on Gambling Disorder, The WAGER reviews a study by Ryan Martin and his colleagues that examines associations between fantasy sports involvement and GD symptoms in college students.

Do college students who pay to play fantasy sports experience more symptoms of GD than students who play for free or don’t play at all? 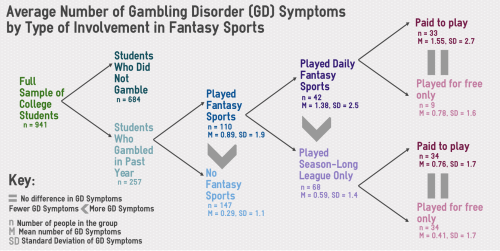 Figure. This tree diagram represents how the sample of students who had gambled in the past year were broken into subgroups for comparison. Click image to enlarge

Although people speculate about fantasy sports being potentially being a risky activity, researchers are only beginning to study this activity. This study suggests that a relationship exists between fantasy sports play and Gambling Disorder symptoms. It should encourage more research about the precise nature of this relationship.

It is unclear from this study what the association between GD symptoms and daily fantasy sports is. Students who played daily fantasy sports were also more likely to have gambled in the past year - so, are their GD symptoms tied to their fantasy sports involvement, or a result of their gambling habits? The researchers also did not attempt to define “gambling” in the survey, so participants used their own interpretations of gambling. Therefore, some participants might have been miscategorized. For example, some students might (accurately) consider playing cards for money to be a form of gambling, whereas others might not.

If you are concerned about your gambling habits, the Brief Biosocial Gambling e-Screener can help you assess your risk of experiencing gambling-related problems and direct you to helpful resources.

Posted at 11:36 AM in Special Series, The Worldwide Addiction Gambling Education Report (The WAGER) | Permalink