The tobacco industry spends vast amounts of money on marketing, including advertising tactics that tap into consumers’ sense of identity, which might reinforce smoking habits. In 2012, Australia became the first country to require plain packaging for all tobacco products sold in the nation. This week, ASHES reviews a study by Hugh Webb and his colleagues that tested whether standardizing tobacco packaging is related, via reduced brand identification, to reduced smoking.

Did daily smokers in Australia self-identify less with their favored cigarette brand after the switch to plain packaging, and was this associated with decreased smoking?

Three months before the Tobacco Plain Packaging Act took effect in Australia, the researchers sent online surveys to 378 Australian adults who smoked daily. Of these, 261 participants responded and were eligible for the study. This survey asked them about their demographics, current heaviness of smoking, whether they intended to quit smoking, and their level of attention to cigarette package health warning labels. Participants also answered questions about their cigarette brand identification and indicated if they agreed with positive stereotypes about their favored brand. Six months after the plain-packaging legislation took effect, 178 of the participants completed a similar survey, which included questions about whether they had quit or attempted to quit smoking since the change in legislation. The researchers then used a technique called path analysis to analyze the data.

One hundred and forty-nine participants (84%) were still smoking at follow-up. Although they were still smoking, they identified significantly less with their preferred brand after the passage of the plain-packaging legislation. They also held less tightly to positive stereotypes about their brand and smoked fewer cigarettes per day, but indicated no change in the salience of health warnings on the cigarette packages. (See Figure.)

Then, the researchers divided participants who were still smoking according to their initial brand loyalty. Those who had high brand loyalty before the legislative change were particularly likely to experience a decrease in brand identity, which in turn predicted decreased smoking behavior (i.e., a greater likelihood of having quit attempts, quit intentions, successful quitting, and less heavy smoking). 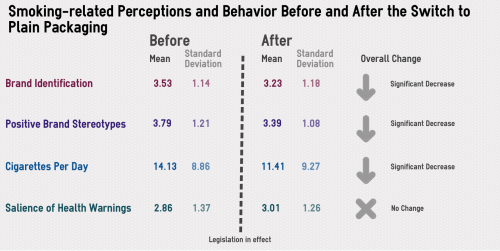 Figure. How people’s smoking-related perceptions and behaviors changed after the legislation took effect (adapted from Webb et al., 2017). Using data from the 149 participants who were still smoking at follow-up. Click image to enlarge

Removing the branding of cigarettes can decrease their appeal, but it was unknown whether this would dissuade people from smoking, or if it would impact people who already heavily identify with their preferred tobacco brand. The findings of this study lend support to the idea that weakening brand identity of tobacco products can dissuade people in general from smoking, and this study suggests that plain-packaged tobacco products might in fact be particularly less appealing to people who heavily identify with a their preferred tobacco brand. More research is needed to replicate this finding.

Although the researchers did control for many variables in their study, their findings aren’t enough to establish that the change to plain-packing caused a decrease in brand identity and smoking behavior because it is observational, not experimental. In an experimental study, the researchers would themselves control and change whether participants were exposed to plain-packaged tobacco. Furthermore, less than 70% of the eligible participants completed both surveys, meaning that there is a risk of non-response bias in these findings.

If you are thinking of quitting or cutting back on your smoking, helplines and resources are available for free online.