STASH, Vol. 14(4) - Marijuana use and perceptions among 12th graders in response to legalization

Medical and recreational marijuana have become increasingly available to American adults over the past two decades. Some fear that increased availability might make adolescents view marijuana has harmless, despite the fact that adolescents who use marijuana regularly are at risk for altered brain development and/or low academic achievement. This week, STASH reviews a study by Aaron Sarvet and colleagues that explores how perceptions and use of marijuana among 12th-graders have evolved over the past two decades.

In both samples, reported past-30 day use of marijuana remained stable over the study period. However, in both samples, perception that marijuana is harmless increased from about 7% around 2007 to between 21-24% around 2014. (See Figure 1). 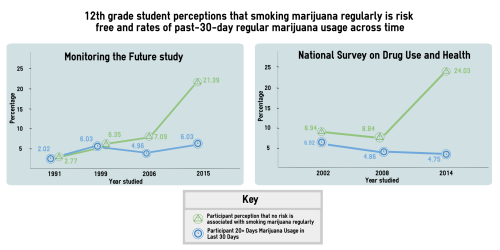 Some fear that legalization leads to increased marijuana usage among adolescents. This fear is challenged by the observed increases in perception that marijuana is harmless, paired with stable rates of daily use over time. Barriers to access and cost might be additional factors that limit marijuana use among this group. These findings suggest that the continued use of well-designed and long-term studies can help policymakers make informed decisions about the true effect of legalization.

If you think that you or anyone you know might be experiencing substance use or gambling-related problems, you can find help resources on the BASIS addiction resources page.

Posted at 08:38 AM in Science Threads on Addiction, Substance Use, and Health (STASH) | Permalink