« STASH, Vol. 14(4) - Marijuana use and perceptions among 12th graders in response to legalization | Main | The DRAM, Vol. 14(5) - The relationship between marriage and substance use behaviors »

The WAGER, Vol.23(4) - What’s a rat to do? Deep brain stimulation in the rat gambling task

Parkinson’s Disease (PD) is often treated with dopamine agonist medications that are effective at relieving symptoms of the disease. However, in some PD patients, these medications can lead to the development of gambling-related problems. One alternative treatment for PD is deep brain stimulation (DBS) of a part of the brain called the subthalamic nucleus (STN), which plays a role in movement and decision-making. This leads to concerns that using DBS in the STN will alter decision-making and itself cause problematic gambling behavior. To investigate this possibility, Wendy Adams and her colleagues conducted a study that tested whether STN-DBS in rats changes their performance on a test of decision-making skills designed for rats - the rat Gambling Task (rGT). This week, The WAGER reviews their work.

Does STN-DBS alter the decision-making ability of rats on the rGT?

The researchers trained 24 male rats to perform the rGT, which is based on a test that measures decision-making in humans - the Iowa Gambling Task. In the rGT, hungry rats are allowed a choice of four response holes to poke their nose in as many times as they can for 30 minutes to try and get the most sugar pellets. Each nose-poke will either result in a win (sugar pellets appear in the food tray) or a loss (a time-out punishment). Some holes are safer bets than others; Hole 2 (the optimal choice) might provide only two pellets on a win but has a low chance of a short time-out, whereas Hole 4 (the risky choice) might provide four pellets but a high chance of a long time-out. (See Figure.) At baseline, some rats (“optimal decision-makers”) learned to consistently choose Hole 2 and others rats preferred Holes 3 and 4 (“risky-decision makers”). The researchers then implanted electrodes in the STN of each rat and made them do the rGT again, ten times with the electrodes turned on (DBS condition), and three times with the electrodes turned off (mock DBS). 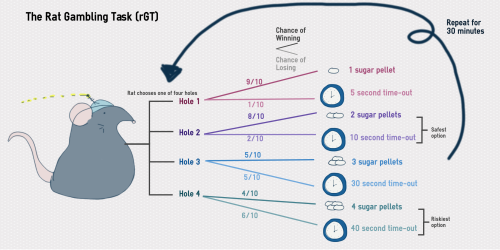 Figure. In the rGT, a hungry rat is given four holes to choose from to earn either sugar pellets or a time-out. Adapted from Adams et al., 2017. Click image to enlarge

While STN-DBS selectively made decision-making less risky in risk-preferring male rats, it remains to be seen if the same effect will occur in female rats, let alone humans. Furthermore, the researchers ended up having to exclude data from seven of the rats (for reasons such as ill-health or the electrodes not being placed correctly), leaving only 13 optimal decision-makers and 4 risky decision-makers in their sample.

Your First Step to Change: Gambling, 2nd Edition is a free self-help book for anyone concerned about their gambling behavior.

What do you think? Please use the comment link below to provide feedback on this article

Posted at 01:15 PM in The Worldwide Addiction Gambling Education Report (The WAGER) | Permalink