« The WAGER, Vol. 23(5) - Problem gambling among young women | Main | Introduction to Special Series on Addiction in the LGBTQ Community »

The DRAM, Vol.14(6) - Treating anger in alcohol use disorder

Imagine someone bumps into you on the street. There are at least two ways to interpret this behavior: the person was simply being careless, or the person was being hostile toward you. If you consistently make hostile attributions, you’d probably feel a lot of anger and might even turn to substances to cope with your anger. Indeed, many people who experience alcohol use disorder (AUD) also experience greater levels of trait anger. This week, The DRAM reviews a study by Jesse Cougle and his colleagues that investigates whether an online program can reduce hostile attribution bias in people with AUD who also have elevated levels of anger, and if reducing this bias reduces drinking behavior.

The researchers recruited 348 people from the internet and their local community to participate in the study. Fifty-eight individuals who qualified for a diagnosis of moderate AUD, had elevated trait anger, and had regular internet access agreed to take part in the study. They completed a preliminary survey that included items about their drinking habits and hostile attribution bias. Participants were randomly assigned to complete either the hostile interpretation bias modification training or watch a series of videos about healthy habits (a control condition). In the training program, participants imagine themselves in a prompted ambiguous situation, and respond in a number of ways to a non-hostile interpretation offered for the situation (see Figure for more detail). Fifty-four participants completed the survey again after the four-week program, and then completed the survey again one month later. The researchers then used a latent growth curve model to examine the data for treatment effects over multiple timepoints. 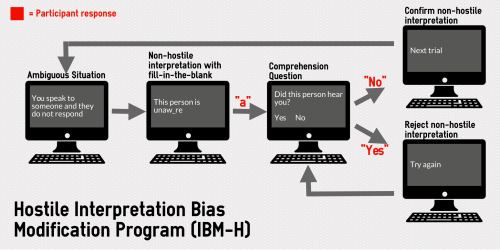 Figure.  An example of one trial of the non-hostile interpretation training is represented above. Each training session consists of 64 trials. Participants completed 8 sessions of the program over the course of four weeks. Adapted from Cougle et al., 2017. Click image to enlarge

The people who underwent the non-hostile interpretation training significantly reduced their hostile attribution bias compared to the control group. Changes in attribution bias also mediated a reduction in trait anger for those in the training program. Experiencing a reduction in trait anger and expressions of anger was associated with a reduction in drinking to cope with anger. However, while both groups reduced their alcohol consumption at follow-up, there was no difference in reduction of alcohol consumption between the two groups.

For people who have problems with both AUD and elevated anger, having tools to treat anger-related issues in conjunction with alcohol use treatment may be helpful, given that people might drink to cope with negative feelings, including anger. These findings indicate that non-hostile interpretation training might be a promising brief, non-confrontational, and easily-administered program that could reduce anger-related symptoms, though more research is needed to see if this intervention could be modified or combined with other treatment to have an impact on alcohol consumption.

Only 58 people participated in the current study. Repeating the study with a larger participant pool would allow us to better understand if and how the training program changes drinking. The follow-up period in this study was only one month, so we cannot know whether reductions in hostile interpretation bias or trait anger will last over a longer period of time.

If you are concerned about how drinking is impacting your life, Your First Step to Change is a free, anonymous resource designed to help you evaluate your behavior and decide whether and how to change it.

Posted at 10:47 AM in The Drinking Report for Addiction Medicine (DRAM) | Permalink