« The WAGER, Vol. 23(6) - Internet Gaming Disorder: A problem for the transgender community? | Main | ASHES, Vol.14(7) - Perceptions about smoking consequences and their relation to cigarette cravings »

Researchers often discuss and study social identities (e.g., ethnicity, sexual identity, gender) as if people experience each identity in isolation from one another. These approaches fail to acknowledge intersectionality-- how these combinations of social identities shape our lives. This week, as part of our Special Series on Addiction in the LGBTQ community, The DRAM reviews a study by Daniel Demant and colleagues that explores how people with intersecting identities experience alcohol-related problems.

The researchers used 2015 data from the Global Drug Survey (GDS), an online survey of drug use worldwide. The GDS asked 90,941 participants questions about demographic characteristics (e.g., gender1, ethnicity2, sexual identity3), substance use behaviors (e.g., lifetime use of alcohol, tobacco, or cannabis), and alcohol-related problems (e.g., items from the Alcohol Use Disorders Identification Test such as “Have you or someone else been injured because of your drinking?”). The researchers used logistic regression analyses to assess how different combinations of gender, ethnicity, and sexual orientation predict alcohol-related problems. 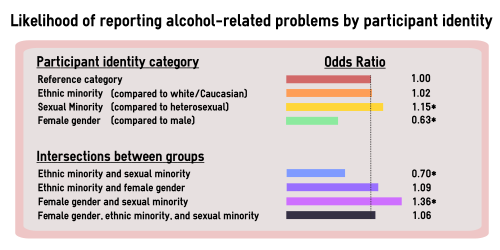 Studies which explore single identity (e.g., sexual orientation) comparisons might oversimplify the complexity of human nature. Policy and treatment programs based on these studies might do a disservice to people whose intersecting identities protect them from or increase their risk for alcohol-related harms. Policy and programs informed by intersectional research might lead to more meaningful treatment outcomes among people with substance use problems. For instance, the New York City health department recently launched a public health ad campaign designed specifically for Chinese men. The ads, in Mandarin, emphasize men’s familial roles and encourage men to question what their families would do without them.

The majority of participants within this study identified as white/Caucasian and heterosexual, so the researchers combined smaller groups (e.g., Hispanic/Latino, Asian) into bigger categories (e.g., ethnic minority) in order to make comparisons. This might have obscured important differences between those smaller groups.

Fenway Health offers substance use treatment services designed for members of the LGBTQ community in Boston, Massachusetts. Access to other addiction help resources can be found on the BASIS addiction resources page.

What do you think? Please use the comment link below to provide feedback on this article