« Introduction to Special Series on Addiction in the LGBTQ Community | Main | Addiction, trauma, and resilience in LGBTQ people’s lives: My experience as an Integrated Behavioral Health Services Provider »

Editor's Note: The 2018 Special Series on Addiction in the LGBTQ Community is sponsored by Fenway Health—a Boston, Mass. non-profit agency that works to make healthcare a right, not a privilege, for Boston's lesbian, gay, bisexual and transgender community and all people in their neighborhood.

Despite a decline in smoking rates in the U.S. over the past 20 years, smoking rates among LGBT communities in the U.S. and other nations are much higher that of the general population, and little data exists about the smoking rates in intersex populations. One way of tackling this health disparity is to adjust traditional tobacco cessation interventions specifically for LGBTI (Lesbian, Gay, Bisexual, Transgender, & Intersex) communities. This week, as part of our Special Series on Addiction in the LGBTQ Community, ASHES reviews a study by Israel Berger and Julie Mooney-Somers that examines smoking interventions that have been tested with LGBTI communities.

What were the research questions?

What tobacco-cessation interventions have been tested with LGBTI populations? Are these interventions effective? How have the interventions been culturally adapted? How are LGBTI sub-communities represented within these studies?

The researchers conducted a systematic review of all studies, published or unpublished, related to smoking interventions in any LGBTI community. They identified a potential pool of 258 articles by searching a range of databases. After establishing a high degree of inter-rater reliability, the authors determined that 19 articles, representing 17 unique interventions, would be included in their final review sample. Finally, the researchers extracted information about various characteristics of each article, including study design, context, efficacy, population, and cultural modifications.

Across the 19 studies, an average of 61.0% participants quit smoking at the end of the intervention and, on average, 38.6% remained smoke-free at 6 month follow-up. These rates are higher than normal. Cultural modifications that were associated with high quit rates included incorporating evidential strategies (i.e. enhancing the relevance of a health issue to a specific group by presenting evidence of its impact on that group) and constituent-involving strategies (i.e. drawing directly on the experiences of the group that the intervention is designed for) into treatment, discussing LGBT-specific triggers, and discussing smoking in the context of hormone replacement therapy (HRT; see Figure). The researchers also noted that most studies were conducted with participants who identified as gay men. Only 16 of a total 3,663 LGBT participants combined across studies identified as transgender, and none of the studies mentioned intersex people. 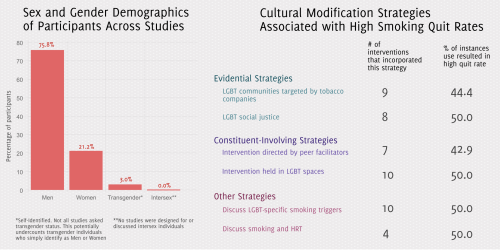 Figure: Women, transgender, and intersex participants are underrepresented across all 19 studies. The cultural modification strategies more likely to be associated with high smoking quit rates are also presented here. Click image to enlarge

While establishing effective and culturally-relevant interventions for marginalized communities is an important step towards reducing health disparities, healthcare researchers must be careful not to reproduce the same disparities within multiply-marginalized groups, such as transgender or intersex people, women and ethnic minorities. This review points out how even in studies ostensibly designed to highlight the needs of LGBTI communities, large gaps remain in who gets to be represented.

The researchers could only identify 19 articles relevant to the topic at hand, which is too few studies to draw strong conclusions from. Furthermore, only one of the studies was designed as an experiment, and most of the observational studies did not include any control or comparison groups. These methodological limitations mean that the results presented here should be interpreted with caution as they are likely to be biased in some way.