Editor's Note: This science review was written by Eamon Atri, a rising junior at Boston College. Mr. Atri is conducting research at the Division on Addiction this summer.

According to the CDC, smoking causes more than 480,000 deaths in the US alone. In the same vein, smokers in the US are more likely than the general population to suffer from a psychiatric or substance use disorder. The connection between smoking and mental health has not been as thoroughly examined outside the US. This week, ASHES reviews a study that observes trends in an Indian sample of tobacco users and non-tobacco users to determine if there is a connection between tobacco usage and psychiatric morbidity (i.e., presence of at least one mental illness).

The researchers recruited 200 out-patients from the Sinhgad Dental College and Hospital in India. Half of the participants were tobacco users and the other half reported never using tobacco in their lives.  All participants completed the General Health Questionnaire-28 (GHQ), a questionnaire often used to determine whether a respondent has a psychiatric disorder or is at risk of developing one. A score of 24 or less suggests that a person is mentally healthy whereas a score of greater than 24 indicates the presence or potential existence of a mental illness. The researchers also recorded participants’ daily frequency of tobacco use and how many years they have been using tobacco. 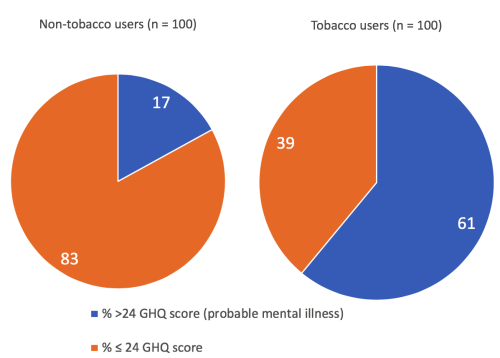 The results of this study provide a non-US perspective on the idea that people dependent on tobacco products are much more likely to have psychiatric morbidity. While many of the participants could have been using tobacco to cope with the stress they feel in life, at least some could also be using tobacco to manage symptoms of an underlying mental ailment. If a mental ailment is at least partially responsible for a given case of tobacco dependence, therapy could drastically improve recovery rates. The results of this study therefore implicate the necessity of having addiction/rehabilitation treatments mixed with psychosocial counseling.

The method of testing for mental health (the GHQ) is customarily used for screening for low-severity and minor mental illnesses and the version used in this study is particularly limited.  Another limitation of this study was that it excluded people who have a dependence or addiction to a drug other than tobacco. Perhaps psychiatric morbidities are not just connected to tobacco dependence but to  addictive substances more broadly. Finally, this study was cross-sectional, which means that even if evidence points to a connection between mental illness and tobacco dependence, this does not prove that one can directly cause or lead to the other.

Great article on a very important topic! A highly recommended read for all those who smoke or have a loved one who smokes and those who consider smoking. Super interesting! Concise and well written.