Editor's Note: This science review was written by Maya Barr, a rising junior at Harvard University. Ms. Barr is conducting research at the Division on Addiction this summer.

“Present bias” is the term used to describe how individuals perceive events, gains, and losses in the present as more significant than those in the future. A small amount of present bias is reasonable. For example, receiving $5 in the present should have more value than receiving $5 in the future. However, when present bias is too strong, individuals may undervalue future rewards and losses and overvalue present ones, which could be harmful. This week, The DRAM reviews a study by Allen Bailey and colleagues that investigates whether people with alcohol use disorder (AUD) suffer from a strong present bias.

Participants with AUD had a stronger present bias than those without AUD; they more strongly preferred to receive rewards in the present and to delay suffering consequences. In addition, the AUD group particularly showed a present bias when they were distracted. 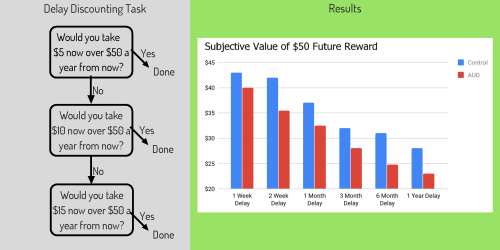 Figure 1. Participants completed four versions of a delay discounting task. The data collected from these tasks was used to estimate the subjective value of rewards and losses for both groups (i.e., the extent of present bias).

For people suffering from AUD, making sound decisions may be more difficult when the decision involves comparing the value of a loss or reward in the future to one in the present. For example, choosing between having a beer after a tough day versus continuing to strive for a sober life may present a challenge for those with a strong present bias. For such an individual, the immediate reward of a beer may be perceived as more valuable than obtaining a long term goal of sobriety. Minimizing instances where individuals have to make important decisions like this alone or without assistance may help them to make more sound decisions.

All participants in this study were well rested, sober, and did not experience withdrawal symptoms during testing. In the real world, fatigue and intoxication may play a larger role in decision making.

Additionally, real world financial differences were not measured during testing although they may have played a role in the decisions participants made. Although participants were informed that they would not actually gain or lose any of the money in the testing scenarios, individual financial pressures may have influenced some of the decisions made.

If you or someone you know wants to learn more about alcohol use disorder, please visit our addiction resources page and raise your concerns with your primary care provider or a mental health specialist.

Posted at 10:21 AM in The Drinking Report for Addiction Medicine (DRAM) | Permalink