« ASHES, Vol.14(7) - Perceptions about smoking consequences and their relation to cigarette cravings | Main | The WAGER, Vol. 23(7) - A new treatment for Gambling Disorder? The answer might shock you »

STASH, Vol.14(7) – Does stress affect drug use in rural communities?

Editor's Note: This science review was written by Julia Peterson, a rising senior at Oberlin College. Ms. Peterson is conducting research at the Division on Addiction this summer.

As drug overdose deaths in the United States continue to rise, researchers are working to gain a better understanding of the factors that affect drug use. This is an especially critical question in rural communities, who face a severe shortage of mental health professionals. When studying rural adults, it is important to consider that the patterns of their drug consumption may be different from those of their urban counterparts, and they may be affected by stressors in different ways. This week, STASH reviews a study by Pamela Black and Helen M. Hendy that examined how psychological stressors affect rural adults’ drug use.

What are the associations between rural and urban adults’ use of specific drugs and their levels of psychosocial stress?

The authors analyzed a subset of the data collected for the 2014 National Survey of Drug Use and Health (NSDUH). This included responses from 8,600 rural adults and 18,481 adults from large urban areas. The NSDUH asked about whether participants had used painkillers (nonmedically), marijuana, cocaine, methamphetamines, and heroin at all during the past year, and included questions about their level of psychological distress. They also collected information about demographics including gender, age, race, education, marital status, and income, so that they could control for confounding variables. They used linear regression to determine how environment (rural or urban) and levels of psychological stress predicted drug use. 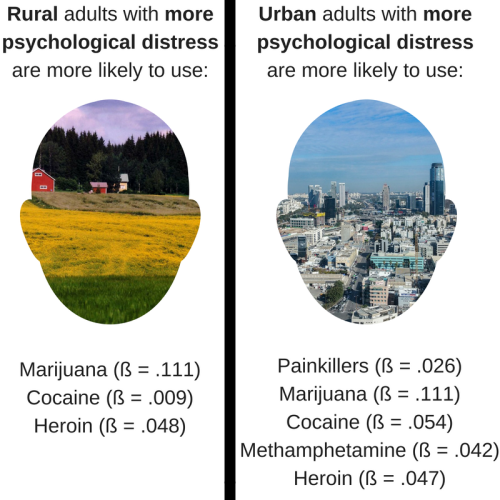 Figure. Patterns of drug use among adults with high levels of psychological stress in rural and urban communities. Numbers in parentheses are standardized regression coefficients, which quantify associations between independent variables (in this case, psychological distress) and outcomes (in this case, drug use). Click image to enlarge

The results of this study demonstrate that drug use is associated with higher levels of psychological stress, and that this association is different in rural and urban communities. This study and other studies like it can help determine which mental health resources are most urgently needed in rural communities, which will help to best meet the needs of this underserved population.

The authors also found that, contrary to what they had expected based on what some previous research has shown, painkiller use was not especially prevalent among rural adults experiencing high levels of psychological stress. This finding is important because it shows an area where researchers in the field are finding different results, and will need to do more research to understand it better.

This study asked about participants’ drug use during the past year as a simple yes/no question, and they did not measure the quantity or frequency of participants’ drug use. This means that some groups of participants might have been using drugs much more heavily than others, but it is impossible to draw distinctions between levels of drug consumption with these data. The authors also chose to exclude data from small urban populations in their analysis, which means that the drug use behavior of adults from small urban areas cannot be compared to the behaviors of adults in rural or large urban communities.  Furthermore, when data is collected at only one time point, we cannot draw conclusions about whether psychosocial stress causes these patterns of drug use, or whether these patterns of drug use cause psychosocial stress.

If you think that you or anyone you know might be experiencing substance problems, you can find help on the BASIS addiction resources page.

Posted at 10:32 AM in Science Threads on Addiction, Substance Use, and Health (STASH) | Permalink