« The WAGER, Vol. 23(9) - How should we measure money lost from gambling? | Main | ASHES, Vol. 14(10) - E-cigarettes, cigarettes, and dual use: Which behavior predicts marijuana use among high school students? »

The DRAM, Vol.14(10) - Transcendental Meditation for Alcohol Use Disorder: A helpful treatment component?

Roughly 16 million people in America have Alcohol Use Disorder (AUD). While effective treatments are available, not all treatment options are effective for all people. There is evidence that some forms of meditation can be added to addiction treatment programs to improve outcomes. This week, The DRAM reviews a study by Jan Gryczynski and his colleagues that assesses the feasibility and efficacy of incorporating Transcendental Meditation (TM) into an inpatient AUD treatment program.

Can TM be incorporated into an inpatient AUD treatment program, and does it have any impact on treatment outcomes?

The researchers conducted the study at an inpatient addiction treatment facility with two groups of patients who had never practiced meditation before. The first cohort of thirty people were recruited from patients who were admitted in late 2015. They received standard treatment1 at the facility before being discharged. The second cohort was recruited from patients admitted in early 2016. This group received classes in Transcendental Meditation (TM) as well as the same standard treatment. These participants were also encouraged to attend additional weekly follow-up meditation sessions after leaving the treatment center. The researchers interviewed all participants three months after being discharged from treatment to ask them about their alcohol consumption, meditation practice, stress levels, and psychological distress in the time since they received treatment.

Three months after the program ended, 85% of participants who had learned TM were still practicing meditation on their own on most days within the last month. Participants in both groups of the study improved on outcomes including stress, psychological distress, alcohol craving, and alcohol consumption, and there were no statistically significant differences in treatment outcomes between the two groups. However, the researchers then identified 16 participants who closely adhered to the TM practice (that is, those who continued to practice TM at least twice a day on more than half the days of the previous month). When compared against the rest of the study participants, these individuals experienced statistically significant improvements in  alcohol use and heavy drinking. 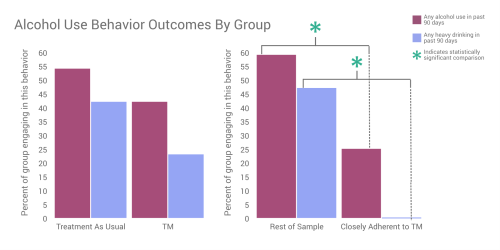 Given the extensive public health harms associated with alcohol, many researchers are interested in identifying program components that increase the efficacy of AUD treatment. Although this pilot study does not provide evidence that incorporating TM into improve AUD treatment can improve treatment outcomes across the board, it demonstrates that TM can be integrated into a traditional AUD inpatient program, and suggests that certain participants might benefit from TM.

The two groups participating in this study were recruited and treated at two different time points. This means that the two groups might not be directly comparable. For example, patients who were admitted to the inpatient treatment center during the holiday season might be facing different stressors that those who were admitted in the spring. A stronger study design would involve running both treatment groups simultaneously and assigning participants to the groups randomly.

If you are concerned about your drinking, the NIAAA Alcohol Treatment Navigator can help you find evidence-based treatment options in your area.

Posted at 11:05 AM in The Drinking Report for Addiction Medicine (DRAM) | Permalink