The DRAM, Vol. 14(11) - Is abstinence necessary for alcohol treatment success?

Often times, researchers and clinicians measure alcohol treatment success by the number of occasions people drink more than a certain number of drinks in a single day. Categorizing success or failure based on counting drinking days might actually be a poor predictor of treatment success, because this approach does not allow for lapses or controlled drinking behaviors. This week, The DRAM reviews a study by Katie Witkiewitz and colleagues that explores how patterns of drinking during treatment relate to social and personal problems three years later.

How do general patterns of drinking during treatment relate to problems three years after treatment?

The researchers analyzed baseline and three year follow-up data from 889 patients enrolled in outpatient treatment for alcohol use disorders.1 Participants answered several questions about their drinking patterns and consequences.  The researchers used a type of latent class analysis to categorize participants in terms of the drinking patterns they followed most of the time during treatment. The researchers then used chi-square tests to see how these patterns relate to percent heavy drinking days,2 negative experiences, and problematic social interactions at the three-year follow-up.

The researchers identified seven categories of participants. Here, we focus on three of these groups:

Persistent heavy drinkers subsequently reported the most negative consequences and the most problematic social interactions of all patterns of drinkers. Interestingly, participants who were abstinent during treatment and those who alternated between abstinence and low risk drinking during treatment3 did not differ significantly from one another on subsequent percent drinking days, negative consequences, and problematic social interactions (see Figure). 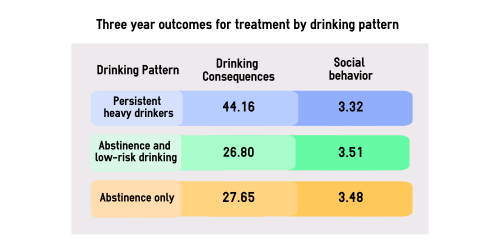 These results suggest that those who alternate between abstinence and controlled drinking during treatment can achieve success post-treatment. Total abstinence might not be a necessary or appropriate goal for all treatment seekers.  Researchers and clinicians should consider looking at overall patterns of use during treatment and follow-up, rather than counting the number of mistakes.

This study looked at data from a study conducted in the 1990s. People might experience different social consequences today than they did then. Additionally, since these data were collected, the diagnostic criteria for alcohol use disorders have changed.

1 Participants were eligible to be included in this analysis if they met DSM-III-R criteria for alcohol abuse or alcohol dependence, were enrolled in outpatient treatment for alcohol related problems, and were actively drinking in the three-month period prior to treatment.

Posted at 10:42 AM in The Drinking Report for Addiction Medicine (DRAM) | Permalink

Thanks for bringing this study to our attention. We have known for a long time that "Total abstinence might not be a necessary or appropriate goal for all treatment seekers." For more on the history an recent findings see our essay: Should dependent drinkers always try for abstinence? at https://findings.org.uk/PHP/dl.php?f=cont_drink.hot

Why are you going by a study done 28 years ago? So many things have changed, like drug use instead of alcohol.

Great point! Trends in substance use behaviors definitely might have changed over the past few decades. However, people with alcohol-related problems continue to experience negative consequences from their drinking behaviors, regardless of the decade they live in. It is important for us to consider all available information when making decisions about how we can best support people with alcohol-related problems.