Editor's Note: This editorial was written by Wendy S. Slutske, PhD, Professor of Psychological Sciences at the University of Missouri. Dr. Slutske is the Director of the University of Missouri’s Center of Excellence in Gambling Research. This op-ed is part of our Special Series on Self-Directed Recovery. In this op-ed, Dr. Slutske refers to self-directed change as "natural recovery." 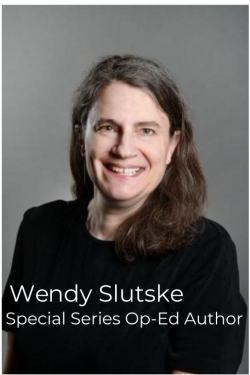 My first foray into natural history research was serendipitous.  I had just initiated a large twin study of gambling disorder in Australia, but the data were not going to be available for analysis for another 4-5 years.  I was looking for a gambling-related project to work on in the meantime.  My colleague at the University of Missouri, Professor Ken Sher, had been conducting an 11-year longitudinal study of college students, primarily focused on the development of alcohol use disorder, in which comprehensive psychiatric diagnostic assessments had been conducted at each of six time points.  I was surprised and thrilled to learn that this included assessments of gambling disorder! (Back then we were still using the term “pathological gambling.”  In order to avoid confusion, I will use the terms “gambling disorder” or “disordered gambling” throughout this essay.) At this time there were few published longitudinal studies of gambling disorder.  Here was my project to work on while my Australian twin data were being collected.

At that time most of what was known about disordered gambling came from studies of individuals in treatment.  We wanted to find out the course of gambling problems in a non-treatment-seeking sample.  In particular, we wanted to document how many of the participants had problems that persisted over time, had problems that escalated in severity, or had problems that were more transient. The results of this study suggested that gambling problems were usually transient.  Those who had problems at one time point were not likely to continue to have problems at a later time point, or to experience an escalation of problems.  In fact, only four of the participants met the criteria for a diagnosis of gambling disorder and none of them reported having sought treatment or attending meetings of Gambler’s Anonymous.  This study supported the idea that “subclinical levels of gambling problems are not necessarily a stage that precedes the development of a full-blown gambling disorder but also represent a less severe final outcome” for some. This paper was the focus of a three-part review in The WAGER 8(26), 8(27), and 8(28).

The college student study left several important topics unaddressed, such as the natural history of more severe gambling problems consistent with a DSM diagnosis.  At around that time, data from two large nationally-representative cross-sectional epidemiologic surveys that included diagnoses of gambling disorder had been released into the public domain – the National Epidemiologic Survey of Alcohol and Related Conditions (NESARC) and the Gambling Impact and Behavior Study (GIBS).  The availability of these two studies provided the opportunity to potentially replicate the findings in two independent nationally-representative samples.

Because the NESARC and GIBS studies were cross-sectional, it was not possible to obtain as nuanced a picture of the natural history of gambling disorder as I was able to do in the longitudinal college student study.  But I was able to determine how many people with a diagnosis of gambling disorder were currently asymptomatic, or “recovered.” I was also interested in determining the fraction of individuals with a gambling disorder who had sought treatment.  Individuals who were characterized as recovered but who had never received treatment for their gambling problems were considered “natural recoveries.”  The results of these two studies, NESARC and GIBS, were reassuringly consistent with each other.  Of those who had a lifetime history of a diagnosable DSM gambling disorder, about 40% had recovered, that is, they had not experienced any symptoms of gambling disorder in the past year.  Only about 10% of those with a lifetime history of DSM gambling disorder had ever received professional treatment for their gambling problems or attended a meeting of Gambler’s Anonymous.  Therefore, the majority of the recoveries, about 90%, were achieved without treatment.

By this time, the data from the Australian twin study was available for analysis.  Two of the first papers that I published based on these data revisited these same questions about the natural history of gambling disorder, but in a different country.  In addition, I tested whether there were differences between men and women in the course of gambling disorder, a question that was not addressed in the previous paper based on the United States data.  The low rates of treatment-seeking for and high rates of natural recovery from gambling disorder observed in the United States were replicated in this national Australian sample.  This is noteworthy because of the different health care systems in the two countries; Australia has a national health service whereas the United States does not. This is an important clue suggesting that the predominant reason why those affected with gambling problems do not seek help may not be external barriers such as lack of access to treatment, but personal factors.

Another question that was pursued with the Australian data was whether people who had recovered from gambling disorder were able to continue to gamble without symptoms.  We found that 91% of the participants who we had classified as recovered had participated in some form of gambling in the past year. Although they continued to gamble, the intensity of the gambling behavior of those who had recovered seemed to have decreased.  Those who had recovered were spending less time and money on their gambling than those who had not recovered, and they were also gambling on fewer days compared to their own peak gambling period.  These results suggest that gambling may not be incompatible with recovery, at least for some.  The paper reporting this finding was digested in The WAGER 16(10), and I also did a webinar for the National Center for Responsible Gaming in September 2012 in which I presented some of these findings.

You might say that my research on natural recovery is currently “in remission” (I can’t say that I am fully recovered because I may return to it). The last paper that I published on the topic of natural recovery from gambling disorder was in 2010.  It has been extremely gratifying and reassuring to see that many of the findings that I’ve presented here on the course of gambling disorder have been replicated in better longitudinal studies conducted in Sweden, Canada, Australia, and New Zealand.  Much of the other important research currently being conducted has been focused on developing treatment options that might appeal to different segments of the population, and learning from those who have been able to achieve recovery on their own.

The knowledge that someone with an addictive disorder can get better, sometimes on their own, is extremely important for those affected, their families, treatment providers, and researchers.  A recent essay in the New York Times reported that that “almost all of those who once met criteria for prescription opioid-use disorder achieved remission during their lifetimes.”  The goal of the essay was to dispel the dire images of opioid-use disorder to include “diverse trajectories out of addiction” that include the possibility of recovery.

We are just beginning to appreciate the diverse trajectories out of gambling disorder. My perspective as a researcher is that we can no longer focus exclusively on the 10% who are in formal treatment for gambling disorder because there is a lot to learn from the other 90% who somehow get better on their own.

Posted at 10:04 AM in Op-Ed/Editorials, Special Series | Permalink