The DRAM, Vol.14(13) - Drinking before sex: Are people with Borderline Personality Disorder more at risk?

Drinking alcohol before sex increases a person’s likelihood of contracting sexually transmitted infections (STIs), such as HIV. People who have Borderline Personality Disorder (BPD) have difficulty regulating their emotions, maintaining their interpersonal relationships, and have an unstable self-image. They also often have trouble controlling impulsive behavior. Because of this constellation of symptoms, people who have BPD might be more likely to drink before having sex. This week, The DRAM reviews a study by Ronald Thompson Jr. and his colleagues that examined whether people who have BPD are at greater risk of regularly drinking before sex.

Are people who have borderline personality disorder more likely to drink before sex on a regular basis?

The researchers used data from the second wave of the National Epidemiologic Survey on Alcohol and Related Conditions (NESARC) for this study. The data for NESARC was collected by interviewers who surveyed 34,653 participants at their homes between 2004-2005. Participants answered questions about their mental health symptoms and their use of alcohol and other drugs, including a question about how often they drank before sex1. Thompson and his colleagues then conducted logistic regressions on data from the 17,491 participants of the second wave of NESARC who had been sexually active and drank alcohol within the past year.

People who had a diagnosis of BPD were more than twice as likely than other people to drink alcohol before having sex on a regular basis, even after the researchers took into account their demographics, drinking frequency, relationship status, and other psychiatric conditions (see figure). For every symptom of BPD that an individual endorsed, their likelihood of regularly drinking before sex increased by 20%. However, when each symptom of BPD was examined in isolation, the only symptom that was statistically significantly associated with regularly drinking before sex was “impulsivity in areas that are self-damaging.” Individuals who experienced this symptom of BPD were 1.82 times more likely to regularly drink before sex than people who did not. 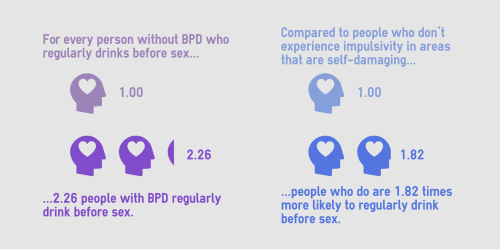 People with BPD often have trouble controlling impulsive behaviors that are harmful to them. Because they tend to drink before sex more often than others, they might be more likely to contract STIs. People who have BPD might benefit from interventions that promote safer sex practices, such as regularly using condoms or dental dams to prevent being infected by STIs, and treatment to help them control their impulsive behaviors more generally.

The authors did not assess whether individuals with BPD were more likely to experience STIs. While people who regularly drink before sex are more likely to contract these conditions, it is possible that a person with BPD who drinks before sex still uses other protective strategies to prevent the spread of STIs. Future research that directly assesses these and other sex-related outcomes (e.g., unwanted pregnancy, sexual assault) can shed more light on which specific harms are bigger risks for people with BPD who drink before sex.

Those who are concerned about their alcohol use can call the Substance Abuse and Mental Health Services Administration National Helpline. Helplines and other resources are also available for those who have, or whose loved ones have Borderline Personality Disorder.

1 Participants who responded “most of the time” or “always” to the question, “During the past year, how often did you drink alcohol before having sex?” were categorized as regularly drinking before sex.

Posted at 10:43 AM in The Drinking Report for Addiction Medicine (DRAM) | Permalink