« STASH, Vol.15(1) - Racial disparities in opioid treatment completion across U.S. cities | Main | The DRAM, Vol. 15(2) - Which strategies could help me control my drinking? »

The WAGER, Vol. 24(2) - Gambling Disorder and Compulsive Buying: How do they compare?

Compulsive Buying (CB) is characterized by a preoccupation with shopping, overpowering urges to buy things, and patterns of excessive shopping that lead to negative financial and emotional consequences. Although CB is not an officially recognized disorder in the DSM-5, it shares many features with Gambling Disorder (GD), which is a recognized form of behavioral addiction. However, while most people who seek treatment for CB are women, until recently most of the research on GD has been focused on men. This week, The WAGER reviews a study by Dominica Díez and colleagues that compared women experiencing compulsive buying to women with Gambling Disorder.

The researchers looked back on the records of 104 women who had sought treatment at behavioral treatment centers at three different hospitals. Forty-nine of these women had been diagnosed with GD, and 55 had been diagnosed with CB by experienced clinical psychologists. From these records, the researchers determined each woman’s demographic information1, disorder history2, and presence of other psychiatric disorders3. The researchers then conducted chi-square and F-tests to compare the two groups of women.

Women in the CB group and the GD group were similar on nearly all demographic and clinical variables examined. Women with CB had a higher education level than women with GD. They were also more likely to be experiencing a depressive disorder and spent significantly more money on shopping each week than those with GD spent on gambling. On the other hand, women with GD were more likely to be married or in a stable relationship and were also more likely to be experiencing tobacco use disorder. There were no other statistically significant differences between the two groups. 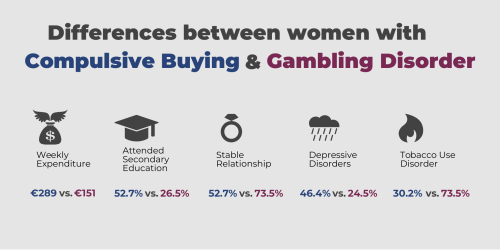 Women with CB appear to have a lot in common with women who have GD, suggesting that the similarities between the two go beyond the preoccupation, urges, and excessive behavior observed in both conditions. Ultimately, more research is needed to understand whether CB is truly a behavioral addiction similar to GD and not itself a symptom or consequence of a different disorder.

All the data in this study came from previous hospital records, meaning that the researchers couldn’t gather any more detailed information that might be important. The findings of this study only apply to women. Although most people who seek treatment for their shopping habits are women, men are just as likely as women to experience CB.

Free anonymous online resources are available if you are concerned about your shopping or gambling habits.

2 This information encompassed age of onset of CB or GD, years experiencing this issue, age at first treatment for this issue, and weekly expenditure on shopping or gambling

Posted at 09:07 AM in The Worldwide Addiction Gambling Education Report (The WAGER) | Permalink