When policymakers decide how to help more people with opioid use disorder enter and finish treatment, race is a necessary factor to consider. In the United States, black and Hispanic people with substance use disorders experience more barriers to receiving treatment and complete treatment less often compared to white people. This information is presented on a national level and doesn’t communicate important regional variations in treatment services and patient demographics that likely relate to completion rates. This week, STASH reviews a study by Gerald Stahler and Jeremy Mennis that examined how completion of treatment for opioid use disorder differs by race across U.S. cities.

Are there racial differences in first-time treatment completion for opioid use disorder patients in US metropolitan areas?

Stahler and Mennis reviewed data from the Treatment Episode Data Set, an annual survey of substance treatment programs in the U.S. Specifically, they examined 34,380 discharges from opioid treatment programs (inpatient and outpatient) during 2013 in 42 metropolitan areas with populations greater than one million, and limited their analyses to discharges of patients with no prior treatment. Treatment completion was defined as finishing all parts of the assigned treatment plan or program; patients failed to complete treatment if they left against professional advice or were terminated by the facility. Stahler and Mennis used logistic regression tests to analyze how opioid treatment completion rates differ by race in these areas.1

Of all patients in the sample, 28% finished treatment, most of whom were white (70%), black (14%), or Hispanic (12%). Nationwide, black and Hispanic patients were about 80% as likely to finish treatment as white patients. However, further regression tests within each metropolitan area found only three locations where treatment completion rates differed significantly by race: New York City, Buffalo (New York), and Riverside (California). A final analysis revealed that New York City contributed to much of the initial nationwide disparity due to its large number of discharges, which accounted for 23% of the data (see figure). 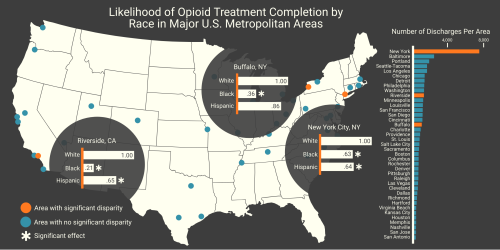 Figure: Bar graphs within the circles show odds ratios indicating the rates of treatment completion among blacks and Hispanics relative to whites. The graph on the right shows the raw number of discharges per metropolitan area. Click image to enlarge.

These results show that national data doesn’t always provide the full picture, as racial disparities were concentrated in a few metropolitan areas. This does not take away from the need for more research into the reasons for treatment dropout across regions, especially among black or Hispanic patients, as reasons for dropping out of treatment are complex and vary by individual and location. Racial differences in treatment outcomes could drive policymakers to minimize this issue with specialized interventions, including increased sensitivity to racial and ethnic backgrounds of patients.

Survey data was self-reported by treatment programs, which could have varying definitions of “treatment completion” and result in inconsistent data. By including only first-time treatment seekers, the authors ensured all discharges were unique individuals, but reduced external validity by excluding patients taking medication for addiction treatment (MAT) who are possibly more representative of opioid use disorder. Best practices for MAT have evolved since the time of this study; today, many experts believe that patients who experience relapse during MAT should not be considered to have failed treatment. Also, substance use patterns vary by population density, so these findings might not extend to rural regions or smaller municipalities.

Our Addiction Resources page has free, anonymous resources for people concerned about substance use or other expressions of addiction.

1 They also controlled for confounds including age, gender, education, employment, living arrangement, treatment type, and number of substances used at admission to treatment.

Posted at 10:14 AM in Science Threads on Addiction, Substance Use, and Health (STASH) | Permalink

I wonder why Buffalo stood out?

It's difficult to say given the complexity of this issue. The authors provided potential explanations for the disparity in New York City (higher socioeconomic status among whites than in other cities, historical legacy of heroin use among minority populations), but not for Buffalo or Riverside. A case study would perhaps elucidate the divide among Buffalo residents with opioid problems.