« The DRAM, Vol. 15(2) - Which strategies could help me control my drinking? | Main | STASH, Vol.15(2) - Improvement in psychiatric symptoms in the absence of counseling for Opioid Use Disorder »

Most public venues in the United States prohibit cigarette smoking to combat the harms of secondhand smoke and littering, and regulations of the increasingly popular e-cigarette are catching up. While the relative safety of vaping compared to smoking is debated, many e-cigarette users believe the activity is harmless and vape in places that ban cigarette smoking, perhaps to the distaste of some. This week, ASHES reviews a study by Cabral Bigman and colleagues that examined how likely people are to confront others about vaping and smoking in public places.

Are people more likely to verbally confront a stranger in public about smoking than about vaping?

The researchers analyzed data from 1,551 people who completed the 2013 e-cigarettes section of the Annenberg National Health Communication Survey (ANHCS), an online health survey of U.S. adults. The ANHCS assessed whether participants were likely to ask a stranger to stop smoking or vaping near them if they could not move away in three venue types: restaurants, entertainment venues (bars, clubs, and casinos), and parks. The researchers divided participants into groups based on smoking and vaping history, and compared these groups to determine which were more likely to speak up about public smoking and vaping.

Out of all participants, 52% said they would likely speak up to someone about smoking if they could not move away in at least one of the venues listed, while only 19% said the same about vaping. People were most likely to speak up about both smoking and vaping in restaurants (48% and 16% respectively), followed by entertainment venues (35% and 14%), and lastly parks (32% and 12%). Across all venue types, nonsmokers were more likely than former and current smokers to speak up about cigarette use. Similarly, non-vapers were more likely than people who tried vaping and current vapers to speak up about e-cigarette use (see figure). 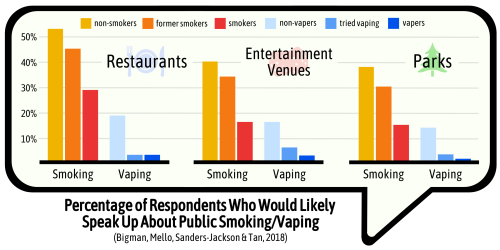 Figure: Percentage of study participants who would likely confront a stranger about their smoking or vaping in three public venue types, separated by smoking and vaping histories. Click image to enlarge.

These findings suggest that the public is far more tolerant of secondhand e-cigarette vapor than secondhand cigarette smoke. There are multiple explanations for this difference, including vaping being seen as less harmful or stigmatized than cigarettes, or a general lack of awareness of e-cigarette bans. The results also show that former and current e-cigarette users are less likely to object to vaping than non-users, a pattern seen with smokers and public smoking tolerance. Moving forward, public venues that choose to ban e-cigarettes should have clear policy language and signage, and should not rely significantly on patrons to uphold these rules.

Participants might have overestimated their willingness to object to others’ smoking or vaping. The survey presented broad categories of venue types, and intentions to speak up may have differed if more specific locations were given. For example, most people are less tolerant of smoking around children than adults, so distinguishing “playgrounds” from “parks” would have added clarity to the results.

SmokeFree offers tools and tips quitting and maintaining abstinence from smoking tobacco. The Center for Disease Control and Prevention offers information, tips, and tools about e-cigarettes and how to quit.

how harmful is second hand smoke from the vapes? Were there conclusive studies for this? I read that vaping worsened indoor air quality.

Thank you for your comment. Multiple studies have assessed the effects of vapor on air quality. Most results agree that e-cigarettes emit lower levels of potentially harmful chemicals into the air than traditional cigarettes. It's unclear which chemicals affect people the most, or if e-cigarette vapor has any negative long-term effects.

Here is a good overview of the research: https://bit.ly/2OhQC9W