The DRAM, Vol. 15(2) - Which strategies could help me control my drinking?

Protective behavioral strategies (PBS) are actions that people can take to control their drinking. For example, some people drink slowly, while others stop after a pre-planned specific number of drinks. People who use PBS regularly are less likely to experience alcohol-related harms than those who use them less often. This week, The DRAM reviews a study by Maria Dekker and colleagues that examined the use of specific PBS among people with high- and low-risk drinking behaviors.

Which specific PBS are related to high- and low-risk drinking behaviors?

The researchers recruited 1,343 participants from an Australian survey website to participate in a four week longitudinal study. Participants described how often they used PBS (e.g., putting ice in your drink, using a designated driver, avoiding drinking games) on a scale from 1 (never) to 5 (always). Participants also responded to questions about typical alcohol use behaviors (e.g., frequency of drinking, average amount consumed). The researchers classified participants who had five or more drinks in a single night at least once in the past year as high-risk drinkers and all others as low-risk drinkers. They used t-tests to assess differences in high- and low-risk drinkers’ use of PBS. 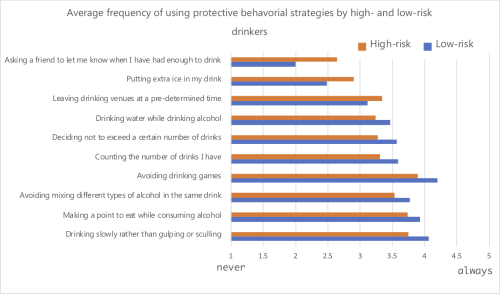 Figure. This figure reports only PBS where statistically significant differences existed between high- and low-risk drinkers. Click to enlarge.

The researchers classified risk by number of drinks consumed on an occasion, rather than actual experiences of alcohol-related harms. Participants’ reports might be inaccurate due to incorrect recall or misleading responses.

Posted at 09:54 AM in The Drinking Report for Addiction Medicine (DRAM) | Permalink