Finding my father: Running, reconnection, and recovery from Gambling Disorder 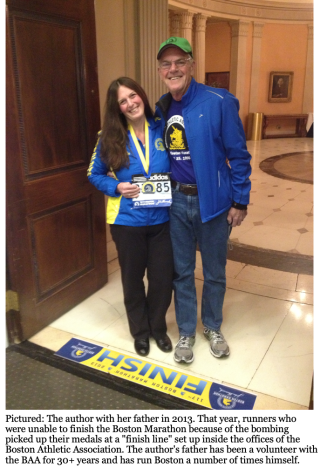 One day, out of the blue, my father showed up in my life. I was about 8 years old or so. He’d been there all along, actually; living in the house with us, caught up in a gambling addiction that financially and emotionally decimated our family. But that is not the man I think of as my father. That man was living a lie, was overweight, was smoking, and was focused on feeding his addiction. That man hit rock bottom and began a twelve step program of recovery. And the man who was born at that time decided that running would be part of his plan to change everything about his lifestyle.

This new man, who was still living in the body of a 35 year old overweight smoker, began a running program at our local track. My mother and I would go with him, joining in as he ran a lap, waiting while he smoked a cigarette, and then joining him again for the next lap. It was the first thing I can remember us doing as a family. Over time, day after day, the cigarette breaks became fewer, the laps became bigger, and my dad, athletic and disciplined, emerged. In the more than four decades that have followed, I have watched him restore integrity to every part of his life.

I share my father’s love of running. I also share his propensity for addiction. When I struggled with an eating disorder in my twenties and thirties, it was my father who most understood the misery and challenge of being caught in a cycle of self-destructive behavior and it was his recovery-based lifestyle that offered a beacon for me as I moved toward my own recovery. We have logged many miles, together and separately, on our journey to becoming our best selves. In that time I have been able to be honest with him without fear of judgement and I have known that I have offered him that same kind of unconditional acceptance.

"We have logged many miles, together and separately, on our journey to becoming our best selves."

Make no mistake: there were real losses that came with his addiction. He was never home at night when I was a young child, preferring to spend nights at the dog track. The monetary losses stole financial security and a dream home. There was an icy tension between my parents most days. When their marriage ultimately ended, he and I were often at odds. But ultimately, we found a path to reconnect. The blessings of recovery are real; the hurts of the past are small pieces of history interwoven in a present-day tapestry that is rich and beautiful. The gifts that his recovery has given me shine far brighter than any of the pains of the past.

My relationship with my father is one of the most important in my life. He’s also my children’s biggest fan. While addiction may have kept him from attending my childhood events, recovery has allowed him to be at almost all of my kids’ games, concerts, and special moments. He’s stood at finish lines and cheered for me, he’s been a role model for me in difficult situations, and he’s been a leader in our community.

My dad’s active addiction robbed me of some things but his active recovery has been the source of so many of the blessings in my life. I am truly grateful and proud to be the daughter of a person in recovery and honored to carry the message of hope to others.

Posted at 09:36 AM in Op-Ed/Editorials, Special Series | Permalink