« STASH, Vol. 15(3) - Does nonmedical use of stimulants increase risk for gambling problems among adolescents? | Main | The DRAM, Vol. 15(4) - What did you expect? Alcohol outcome expectancies during Cognitive Behavioral Therapy. »

The WAGER, Vol. 24(4) - How do gambling patterns of poker players change over time?

Is there any game more symbolic of gambling worldwide than poker? It’s no surprise that a sizable portion of poker players report some gambling-related problems. However, almost all studies of poker players are cross-sectional, so they cannot tell us how problem gambling symptoms change with time. This week, as part of our Special Series on Gambling Disorder, The WAGER reviews a study by Magali Dufour and colleagues that tracked poker players’ gaming habits, mental health, and levels of problem gambling over three years.

What was the research question?
During a three year study period, how do symptoms of Gambling Disorder change in poker players?

What did the researchers do?
Dufour and colleagues recruited a convenience sample of 304 adult poker players in Quebec, Canada. Participants completed a baseline interview and three follow-up interviews, each one year after the last. The interviews assessed symptoms of problem gambling with the Problem Gambling Severity Index (PGSI), as well as depression, anxiety, impulsivity, recent alcohol and substance use, preferred mode of gambling (casinos or Internet), and betting games other than poker played in the past year (to measure gambling involvement). The researchers used latent class analysis to uncover hidden gambling patterns in players and regression tests to determine what predicted these patterns. 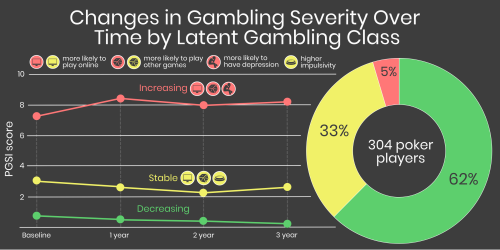 Figure: Left: Average PGSI scores for each group over the course of the study, with associated risk factors for the Stable and Increasing subgroups.1 Right: Sample of poker players broken down by subgroup. Adapted from Dufour et al. (2019). Click image to enlarge.

Why do these findings matter?
These poker players were similar to gamblers from previous studies in some respects: the majority were healthy gamblers, those with gambling problems at baseline generally experienced more difficulties over time, and those who played more games had higher risk of escalating gambling problems. Interestingly, Dufour and colleagues did not find associations between gambling patterns and alcohol use, drug use, or anxiety, which aligns with some studies but not all; continued research can determine the conditions under which comorbid substance use and mood disorders raise the risk for gambling-related problems. In the meantime, empirically supported prevention tools should be made available in online and land-based poker venues.

Every study has limitations. What are the limitations in this study?
Convenience sampling and self-report interviews create the possibility of selection bias and response bias, respectively. Some poker players could have been discouraged from participation due to lack of trust or some other reason, and those who did participate may have felt the need to underreport their symptoms. Anonymous surveys can decrease such bias.

For more information:
Do you think you or someone you know has a gambling problem? Visit the National Council on Problem Gambling for screening tools and resources. For additional resources, including gambling and self-help tools, visit The BASIS addiction resources page.

1 A score of 3-7 indicates moderate problems, and a score of 8 or higher indicates problem gambling.