« The WAGER, Vol. 24(6) - Differences in stigma across levels of gambling behavior | Main | Op-ed: How The Phoenix and the Red Sox are partnering to change the stigma of addiction »

There are many reasons why people who experience Alcohol Use Disorder (AUD) might not seek treatment. They might not be aware that effective treatment options exist, or they might not have access to those treatment options. Others might have the ability to access treatment, but choose not to because they fear the labels and judgment associated with being in treatment. This week, as part of our Special Series on Stigma and Addiction, The DRAM reviews a study by Karen Chartier and colleagues that examined changes over time in the most common reasons people give for not seeking help for their drinking.

What did the researchers do?
The data for this study came from two nationally representative surveys of U.S. adults: the NLAES conducted in 1991-1992, and Wave 1 of the NESARC conducted in 2001-2002. The researchers focused on the 1,072 participants from the NLAES and the 1,012 from the NESARC who answered yes to the question, “Was there ever a time when you thought you should see a doctor, counselor, or other health professional or seek any other help for your drinking, but didn’t go?” Participant selected their reasons for not seeking treatment from twenty-one different options. The researchers categorized these response options as either (1) predisposing, meaning beliefs and fears about the stigma of AUD, privacy, and treatment; (2) enabling/restricting, regarding lack of social support or logistical barriers (e.g., not having a way to get there); or (3) needs-related, (i.e., respondents’ perceptions about whether they really needed help for their problems). The researchers then used chi-square tests to detect any changes in people’s reasons between the two studies.

What did they find?
Overall, predisposing and needs-related reasons were significantly more commonly endorsed in the early 2000’s than in the early ‘90’s. Enabling/restricting reasons were endorsed at the same rate across both surveys, except that in 2001-2002, more people indicated that they did not have transportation to treatment than in 1991-1992 (see figure). Across both surveys, the most common reason participants endorsed for not seeking help for their drinking was that they “thought [they] should be strong enough to handle it alone.” 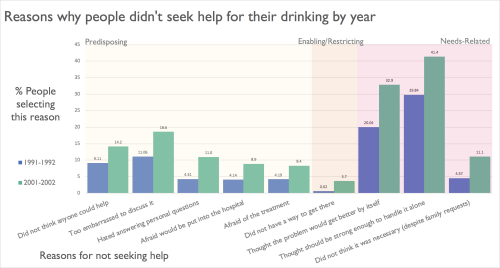 Figure: Reasons for not seeking treatment that became more common in the decade between the NLAES and Wave 1 of the NESARC. Reasons that did not change in frequency between the two surveys1 are not depicted here. Click the image to enlarge.

Why do these findings matter?
Between 1991 and 2002, there was a reduction in rates of treatment seeking for people with AUD. Although this time period saw a number of changes to the economy and the landscape of American health insurance, the rate of people citing logistical or social reasons for not seeking treatment (other than lack of transportation) did not change between 1991-1992 and 2001-2002. Instead, more people viewed their problems as not requiring outside help, felt afraid of treatment, and felt shame about their problems. This suggests that we need to do more work to reduce stigma and make treatment more appealing. Sharing positive stories of people in recovery is one promising way to reduce addiction stigma.

Every study has limitations. What are the limitations in this study?
This study used data from surveys that are twenty to thirty years old. There have since been two follow-up surveys to the NESARC, with the most recent data collected in 2012-13. Extending the analyses to data from the more recent surveys would shed more light on current trends in reasons for not seeking treatment.

For more information:
If you are considering quitting drinking, many options are available. The NIH’s Rethinking Drinking website has information about both professional and self-help options, depending on your situation and preferences.

1. The other reasons that were provided on the survey were: “Afraid of what others would think,” “Could not afford to pay,” “Did not know any place to go for help,” “Did not have time,” “Had to wait too long,” “Inconvenient hours,” “Can not speak English well,” “Could not arrange child care,” “Family member objected,” “Afraid would lose job,” “Thought problem was not serious enough,” and “Wanted to keep drinking.”

Posted at 05:00 AM in Special Series, The Drinking Report for Addiction Medicine (DRAM) | Permalink

I don't understand the purpose of providing retrospective data without current data for comparing and contrasting changes over time, or collecting information from all years for a longitudinal study. Maybe I'm missing the point.

Thank you for your question. The authors of the original study pointed out this particular time period because of a previous observation that treatment seeking rates had fallen between these two time-points. Looking at this era from a historical perspective, there were a number of factors that could have potentially contributed to this difference. The authors pointed out, in particular, the war on drugs and drunk-driving campaigns in the 1980's and 90's, economic growth and reductions in spending in health insurance programs in the 90's, and changes in overall rates of drug use and depression between the 90's and the 00's. By examining the reasons people gave for not seeking treatment during this time period, the authors could begin to understand whether any of these potential historical reasons might have been related to falling treatment-seeking rates, and importantly, determine whether they were structural (i.e., not having access to healthcare) or more related to attitudes and beliefs of people at that time.