« ASHES, Vol. 15(6) - I think, therefore I try: Perceptions about e-cigarette harm and addictiveness as predictors of e-cigarette use | Main | The WAGER, Vol. 24(7) - From Fortnite to slots: Do problem video gaming behaviors predict future problem gambling behaviors? »

STASH, Vol. 15(6) - Attention at all ages: A recent, rapid increase in opioid treatment among older adults

Opioid use disorder (OUD) affects people of all ages, including those struggling with addiction later in life. Older adults are vulnerable to opioid problems due increased prevalence of risk factors including depression, chronic pain, and greater rates of opioid prescription, making this population important to study. This week, STASH reviews a study by Andrew Huhn and colleagues that examined how treatment admissions of older adults for opioid use disorder have changed during the United States opioid crisis.

What was the research question?
What are the recent trends in OUD treatment seeking among older adults?

What did the researchers do?
Huhn and colleagues analyzed data from the Treatment Episode Data Set for Admissions, a database of annual admissions to substance use treatment facilities in the United States. They studied 8,196,260 first-time admissions for OUD from 2004 to 2015, divided into 400,421 older adults (55 years and older) and 7,795,839 younger adults (under 55 years old). They then calculated the percent of patients seeking treatment for the first time for OUD proportional to all patients seeking substance use treatment for the first time. The researchers used regression and chi-square techniques to track how this percentage has changed over time in older and younger adults, and to determine what demographic factors and substance use behaviors were associated with increased treatment admission in older adults. 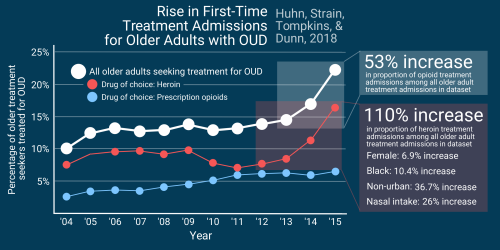 Why do these findings matter?
These results reveal a rapidly growing need for opioid use disorder treatment options for older patients, especially those using heroin. Nonmedical prescription opioid use cases did not rise as quickly as heroin cases, but prescription opioid problems predict future heroin use. Handling the increase in treatment admissions requires interventions tailored to older treatment-seekers, and progress must continue to be made in defining evidence-based guidelines for prescribing opioids. Additionally, these findings remind us that opioid addiction affects people of all ages and backgrounds, not just those we commonly see associated with the crisis. Often, the most vulnerable populations go ignored.

Every study has limitations. What are the limitations in this study?
Multiple public health acts introduced in the early 2010s expanded the range of opioid use disorder treatment services covered by health insurance, which might have caused a rise in the number of older adults initiating treatment for opioid problems. Many studies consider “older adults” to be age 55+ because they tend to start experiencing geriatric problems around this age. However, this cutoff age is still arbitrary; a higher or lower cutoff could yield a smaller rate of increase in older adult treatment admissions.

Posted at 12:04 PM in Science Threads on Addiction, Substance Use, and Health (STASH) | Permalink