The DRAM, Vol. 15(7) - Individual preferences in support for reducing drinking

What was the research question?
Are people’s intentions to reduce drinking and preferred sources of support related to their drinking patterns and problems?

What did the researchers do?
Davies and colleagues used data from the Global Drug Survey (GDS), the world's largest annual survey of drug use. Their data came from 82,190 respondents1 from 12 countries. The survey asked if respondents want to cut down on their drinking in the next year and, if so, if they would like help to do so. Those who reported that they wanted support to reduce their drinking were asked about their preferred sources of support. The GDS also included the Alcohol Use Disorders Identification Test (AUDIT) for assessing drinking patterns/problems.

What did they find?
As in the last round of the GDS, about one-third of the sample (34.8%) reported wanting to drink less in the next twelve months. Those who were possibly dependent on alcohol, as indicated by their AUDIT scores, were especially likely to want to cut down (69.4%). Of everyone who wanted to cut down, 12.8% wanted help to do so. The most popular source of support was self-help tools (online or via an app). But preferences depended on respondents’ drinking patterns and problems. People with relatively low risk were more likely to select digital tools, while those who were possibly dependent on alcohol most commonly reported that they preferred counseling or therapy with a specialist doctor (see Figure). Also, respondents currently on medication for a mental health condition were more likely to select a specialist doctor (35.4%), compared to those not on a mental health medication (23.3%). 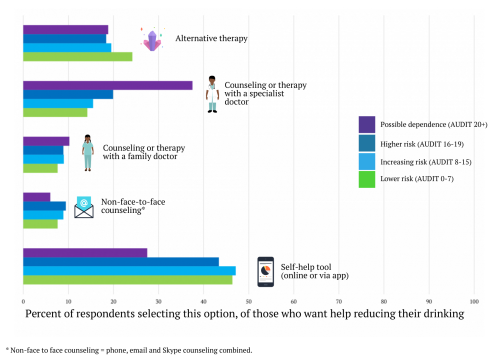 Figure: Respondents’ preferred sources of support for reducing drinking, as a function of their AUDIT score category. Click figure to enlarge.

Why do these findings matter?
Healthcare providers should know which digital tools effectively help people reduce their drinking and encourage their use. However, they should know that higher risk patients might prefer a more personal kind of support. When making a referral to specialty care, a family doctor should consider using a “warm handoff” approach. This often includes helping the patient set up his or her first specialty care appointment.

Every study has limitations. What are the limitations of this study?
One limitation was that the “alternative therapy” category included many options, such as hypnotherapy and drug therapy. Also, people who use illicit drugs might have been more likely to complete the GDS than those who don’t. This effect would overestimate the levels of illicit substance use in the sample.

1. They only included respondents who reported having used alcohol in the last twelve months.

Posted at 10:27 AM in The Drinking Report for Addiction Medicine (DRAM) | Permalink