Last year, 43% of U.S. adults reported that they play video games. While most people play video games within responsible limits, some people can play in excess and experience negative consequences. Young adults are more than twice as likely to report playing video games and this population is more vulnerable to problem video gaming. As adolescents and young adults transition into adulthood and can legally gamble, they may carry over their problem gaming behaviors into problem gambing. This week, The WAGER reviews a study by Helge Molde and colleagues that examined whether problem video gaming behaviors predict future problem gambling behaviors.

What did the researchers do?
The researchers analyzed two years of longitudinal survey data from a nationally-representative sample of 4,601 people aged 16-74 in Norway. In 2013 and 2015, the researchers assessed problem video gaming behavior with the Gaming Addiction Scale for Adolescents1 (GASA) and problem gambling behavior with the Canadian Problem Gambling Index (CPGI). For the GASA, respondents were asked whether they had neglected important activities such as work or school to play video games. For both measures, higher scores indicated more problems with video gaming/gambling. The authors controlled for gender and age and used structural equation models to test whether problem video gaming behaviors in 2013 predicted problem gambling behaviors in 2015.

What did they find?
Respondents with higher scores on the GASA in 2013 had higher scores on the CPGI in 2015, yet no respondents scored above the low-risk CPGI category in either year. The relationship between the GASA in 2013 and CPGI in 2015 was positive but weak. The results remained statistically significant when controlling for gender, age and CPGI scores in 2013. Men reported higher levels of both problem video gaming and problem gambling in 2013 than women. Younger respondents reported higher levels of problem gaming and gambling than older respondents in both years. CGPI scores in 2013 did not predict GASA scores in 2015. 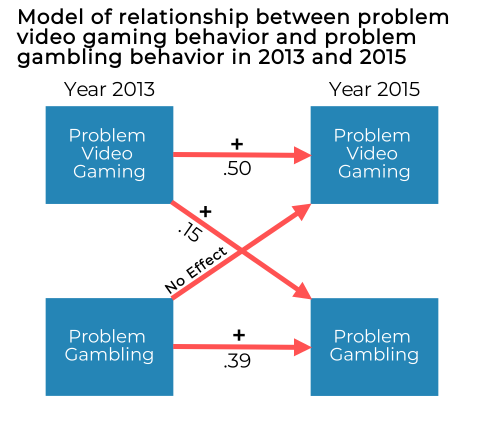 Notes: Statistically significant positive results are indicated with a + sign. Numbers shown on paths are standardized coefficients. Click on figure to enlarge.

Why do these findings matter?
These findings suggest that some behaviors associated with excessive video game play transfer over to gambling as people age. Other researchers have produced results that conflict with this study, so we need to learn more about the relationship between video gaming and gambling. As gaming and gambling experiences converge, regulators such as the Entertainment Software Rating Board (ESRB) could consider including special warnings on video games that have gambling-related elements such as in-game financial transactions and casino-like games of chance.

Every study has limitations. What are the limitations in this study?
This study was conducted on a sample drawn from the country of Norway, so it is possible that the findings may not be generalizable to other countries such as the United States and Canada. For example, the U.S. and Canada may have more resources to provide help for problem gaming and therefore, people may be less likely to develop problem gambling in this context. Due to the use of a self-report survey approach, the data on problem gaming and gambling may not be entirely accurate as people sometimes underreport their actual behaviors.

1. Although the GASA is usually used to measure problem gaming in among adolescents, it is applied to an adult sample in this study with adequate validity and reliability.

Posted at 08:42 AM in The Worldwide Addiction Gambling Education Report (The WAGER) | Permalink