« The WAGER, Vol. 24(8) - Turning to gambling to alleviate work stress: The role of burnout and emotion dysregulation in this relationship | Main | ASHES, Vol. 15(8) - The persistence of thirdhand smoke: How do nicotine dust levels in homes influence the chance of successfully quitting smoking? »

Increased drinking is a staple of many a college experience, and comes with its share of short term consequences including alcohol poisoning, driving under the influence, and academic problems. Often, heavy drinking is confined to college years; students tend to “mature out” after graduating. However, some post-grads maintain their drinking habits and are at risk for developing alcohol use disorder (AUD). Is there a way to identify those who are vulnerable before they receive their degrees? This week, the DRAM reviews a study by Mark Prince and colleagues that examined whether drinking habits in college can predict problem drinking after college.

What was the research question?
Which drinking patterns in college are associated with problem drinking after college, and when do these patterns arise?

What did the researchers do?
The researchers examined data from a 2011 study of undergraduate students at a U.S. university. A cohort of 347 students participated in the study from their freshman year until the fall after their graduation, completing an online survey 19 times over the four years. These participants self-reported the typical number of drinks they consumed on a day of drinking in the previous month and the number of alcohol-related consequences they experienced in the previous month. Once a year, participants were also evaluated for AUD. With this information, the researchers calculated each participant’s average blood alcohol concentration (BAC) on drinking days and noted which participants reported binge drinking. Prince and his colleagues split the sample into those who screened positive for AUD in the final survey and those who did not. They then used regression analyses and effect sizes to compare these two groups’ drinking patterns over time.

What did they find?
In the fall after graduation, 28% of participants screened positive for AUD (AUD+ group), and 72% screened negative (AUD- group). For all measures of drinking behavior, the AUD+ group reported significantly higher levels than the AUD- group at the start of the study (freshman fall), and differences between groups tended to grow until the end of the study (post-grad fall). For number of drinks on a typical drinking day, levels at first increased in AUD+ students, then slowly decreased around the start of Year 3. Alcohol-related harms increased over time in the AUD+ group and remained stable in the AUD- group (see figure). The rate of binge drinking also increased over time in AUD+ students and remained stable in AUD- students. Typical BAC decreased over time in the AUD- group while remaining stable in the AUD+ group. 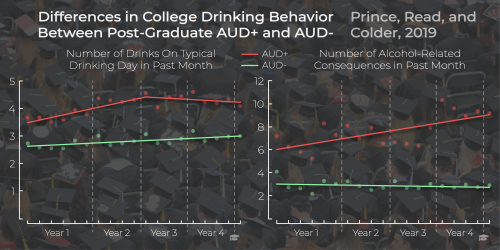 Figure: Drinking trajectories during college of students with AUD and students without AUD post-graduation. Points represent group averages of each group at each survey, with lines summarizing the overall direction.1 Click image to enlarge.

Why do these findings matter?
Students who met criteria for AUD after graduation showed a distinct drinking trajectory, which began to appear very early in college. This is not to say that all AUD- participants abstained from heavy drinking but rather that seemingly small differences in drinking habits and alcohol-related consequences can predict long-term outcomes in drinking. Clinicians should be aware of the risks incurred by even small increases in drinking over time. Furthermore, drinking interventions like brief motivational interviewing can be useful, either early in freshman year to prevent long-term harms, or close to graduation to help students transition into the next stage of adulthood.

Every study has limitations. What are the limitations in this study?
The researchers’ sample was limited to one college and students from ethnic minority groups were underrepresented, so results might not apply widely. Self-reporting might also bias the results if enough students inaccurately recount or lie about their drinking behavior.

1. The red line on the left is bent because the researchers used a special regression technique called joinpoint regression. A simple explanation of this technique can be found in the methods section of this paper.

Posted at 07:00 AM in The Drinking Report for Addiction Medicine (DRAM) | Permalink

Thank you Jamie. Since alcohol is the most abused drug, this information is very helpful to support the long-term damage it can cause.

Everything has a limit and everyone should follow it.