If you live in the United States or in a number of other countries, you might have noticed that vape shops are on the rise. In 2016, approximately 41% of e-cigarette users in the U.S. purchased products from a vape shop, compared to 27% online and 30% elsewhere. Vape shops are unique from other options not only because they primarily sell vaping products, but also because employees often encourage using e-cigarettes to quit smoking, a controversial idea in public health. This week, ASHES reviews a study by Greta Hsu and colleagues that investigated whether vaping product source predicts vaping frequency and successful smoking cessation.

What was the research question?
Is primary place of e-cigarette purchase related to e-cigarette use patterns and smoking cessation?

What did the researchers do?
The researchers analyzed responses of U.S. adult e-cigarette users from two online surveys distributed in 2014 (879 participants) and 2016 (743 participants), for a total of 1,622 participants.1 Participants reported where they primarily purchased their e-cigarette products: vape shops, smoke shops,2 the Internet, or retail stores (convenience stores, grocery stores, or pharmacies). Participants also reported if they smoked cigarettes and if so, whether they currently smoke frequently. For participants who reported smoking frequently, the survey asked whether they attempted to quit smoking in the previous 12 months, if they succeeded, and what aids (i.e., e-cigs and/or FDA-approved aids) they used to help quit. The researchers grouped participants by primary e-cigarette source and compared vaping and smoking behaviors using difference in proportion tests. 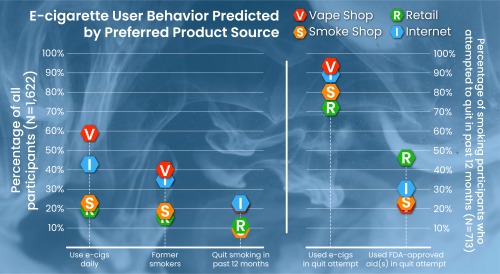 Why do these findings matter?
These findings provide evidence that vaping frequency and successful smoking cessation differ by retail channel. We’ve seen before that vaping can help people quit smoking, sometimes with even higher quit rates than FDA approved methods, and other factors could have influenced the relationship between vape shops and smoking cessation as well. Vape shop customers could be more serious about vaping, more motivated to quit smoking, and more willing to seek guidance and social support at these stores. However, vape shops and e-cigarettes might not be an ideal solution to smoking: mounting evidence shows that e-cigarettes are harmful, appealing to children, and can even lead to smoking. As more vape shops open and their influence spreads, they must be considered when creating and enforcing e-cigarette health policies.

Every study has limitations. What are the limitations in this study?
Participants self-reported their responses, which means they might have been dishonest about their habits. Participants indicated their main source of vaping products, but they may have bought products from multiple sources, meaning these results could be considered rough estimates of the market shares of different sources. Lastly, all results linking vaping, smoking, and place of purchase are cross-sectional, so we can’t determine which variables cause others.