« The DRAM, Vol. 15(9) - Under the peer influence: Heavy drinking beliefs in college students | Main | Introduction to the Special Series on Addiction and Social Media »

Adolescence is an important period in the development of addictive behaviors, as 90% of tobacco smokers and 87% of people with marijuana dependency in young adulthood began using those respective substances before age 18. Recently, the rise in popularity of alternative tobacco products has reversed downward trends in youth tobacco use. Researchers have taken notice, leading to more studies on the harmful consequences of alternative tobacco product use. This week, ASHES reviews a study by Janet Audrain-McGovern and colleagues that examined how adolescent e-cigarette, conventional cigarette and hookah use predicts future marijuana use.

What was the research question?
What is the relationship between adolescent e-cigarette, conventional cigarette, and hookah smoking in ninth grade and marijuana use in eleventh grade?

What did the researchers do?
The researchers analyzed survey data on e-cigarette, conventional cigarette, and hookah smoking among 2,668 Los Angeles 9th graders who had never used marijuana. The participants were surveyed again in 11th grade, and this time they were also asked about their marijuana use. Using logistic regression models and controlling for several potential confounders,1 the authors tested how e-cigarette, conventional cigarette, and hookah use in 9th grade predicted marijuana use in 11th grade.2

What did they find?
Marijuana use in 11th grade was reported by 19.5% of 9th-grade e-cigarette users, 23.9% of 9th grade hookah users, and 13.4% of 9th-grade cigarette users. Adolescents who used e-cigarettes, hookah, or conventional cigarettes in 9th grade were more likely than non-users to use marijuana in 11th grade; this was especially true for e-cigarettes and hookah (see figure). These findings remained statistically significant when controlling for potential confounders. 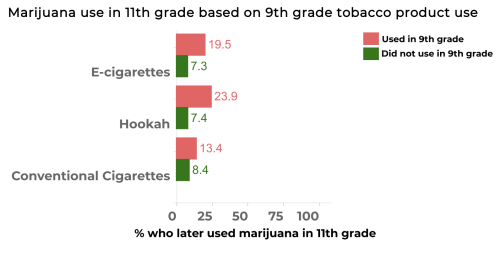 Figure: E-cigarette, conventional cigarette and hookah use in 9th grade and current marijuana use in 11th grade. Click on figure to enlarge.

Why do these findings matter?
Despite the widespread misconception that e-cigarette and hookah use is less harmful than conventional smoking, this study suggests that adolescents who use these products may be especially susceptible to using marijuana when compared with adolescents who don’t. Using tobacco products might directly increase the risk of marijuana use by reducing sensitivity to throat irritation due to smoking or by making the brain’s reward system primed to feel pleasure from drug use. Or, there might be an indirect association—teenagers who use tobacco products might already be at risk for marijuana risk because they have easier access to drugs. Either way, adolescents who use e-cigarettes or hookah seem to need extra help with drug use prevention.

Every study has limitations. What are the limitations in this study?
The study sample was limited to only ten schools in one city in the United States, so these results might not generalize to all adolescents in all cities. The authors also did not measure changes in the legal status of marijuana in the United States or the availability of marijuana dispensaries near participants’ homes, which could affect marijuana use.

For more information:
SmokeFree offers tools and tips about quitting and maintaining abstinence from smoking. The Centers for Disease Control and Prevention provides research and tips about cigarettes and how to quit. For evidence-based information about the health effects of marijuana, read the highlights from the comprehensive report released by the National Academies of Sciences, Engineering, and Medicine.

1. They controlled for gender, age, race, ethnicity, parental education, living situation (i.e., with both biological parents vs. single parent), family history of tobacco smoking/drug use, peer tobacco smoking/marijuana use, level of depression measured with the Center for Epidemiologic Studies Depression Scale, and level of impulsivity measured with the Temperament and Character Inventory.

2. The authors ran two sets of regression models to test their hypotheses. First, they included the three tobacco product measures as dichotomous predictors with control variables in a regression model with the outcome of current (i.e., past 30 days) marijuana use in 11th grade vs. never used. All three tobacco product use variables were significant predictors of the marijuana outcome. Next, they included a dichotomous measure of any type of tobacco use in 9th grade with control variables and the current marijuana use in 11th grade vs. never used outcome measure. The tobacco use variable was a significant predictor in this model.

Could not understand the figure. What does the "not use" means for each of the categories?

Thank you for your question regarding the figure labels.