« ASHES, Vol. 15(8) - The persistence of thirdhand smoke: How do nicotine dust levels in homes influence the chance of successfully quitting smoking? | Main | The WAGER, Vol. 24(9) - 7-day exclusion from online gambling: A quick fix for at-risk gamblers? »

STASH, Vol. 15(8) - Nature vs. nurture: The interaction between early-life adversity and genetics in adult drug use

Early-life adversity can lead to substance misuse in adulthood and other kinds of mental and physical health harm. But this effect may be influenced by a person’s genetic makeup. Specifically, individuals with both the “Met/Met” expression of the COMT gene and exposure to early-life adversity show a blunted cortisol response to acute stress in adulthood, suggesting a gene x environment vulnerability. This week, STASH reviews a study by William Lovallo and colleagues that examined how experiencing adversity during childhood and COMT gene expression interact to play a role in an individual’s adult drug use.

What was the research question?
How does expression of the COMT gene impact the association between exposure to early-life adversity (ELA) and experimenting with drugs?

What did the researchers do?
Lovallo and his colleagues used data from the Oklahoma Family Health Patterns Project to identify 480 healthy1 individuals ages 18 to 30. Researchers identified each individual’s expression of the COMT gene: Met/Met, Met/Val, or Val/Val. They also assessed the participants’ early-life exposure to physical, sexual and emotional adversity and had participants report if they had ever tried 8 categories of recreational drugs. They studied how recreational drug use varied by genotype and childhood adversity.

What did they find?
Overall, exposure to more forms of early-life adversity was associated with trying more types of recreational drugs. However, once the researchers studied the genotype groups separately, they found that this pattern was only statistically significant for the Met/Met genotype group: in this group, those who experienced two or more types of childhood adversity tried significantly more drugs and started drinking earlier than those with less early-life adversity (see Figure). 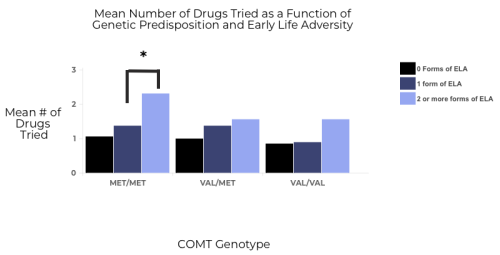 Why do these findings matter?
All children who are exposed to early-life adversity might benefit from effective education, prevention and intervention efforts before they start to misuse drugs. This study did not explain why people with the Met/Met expression and early-life adversity are more likely to experiment with recreational drugs, but research that eventually answers that question and others like it could pave the way for more targeted interventions to improve health and well being.

Every study has limitations. What are the limitations of this study?
The present study only included individuals who had no history of alcohol or drug dependence, meaning that the results only have important implications for drug use behaviors of healthy individuals. Therefore, this study does not answer the question of how early life adversity and genetics impact substance use beyond experimentation. In addition, researchers only assessed a specific polymorphism of one gene.

1. Healthy was defined as having no history of alcohol or drug dependency, not meeting the criteria for any substance misuse disorder within the past 60 days, and passing a urine drug screen and breath-alcohol test on testing days.

Posted at 02:34 PM in Science Threads on Addiction, Substance Use, and Health (STASH) | Permalink