« One More Hit of Facebook: Social Media, or Social Menace? | Main | ASHES, Vol. 15(10) - Can social media be the answer to quitting smoking? The effects of a social media campaign on young adult smoking cessation »

With almost 2.5 billion active users, Facebook is still the most popular social networking website. In addition to hosting users, Facebook also allows companies to create and post branded content to their own “pages.” Users can interact with this content in the same way they engage with their Facebook friends. This feature fosters a lucrative space for marketing alcohol products; most popular alcohol brands have Facebook pages. We know that exposure to alcohol advertising predicts increased drinking in teens and young adults, and ads on social media reinforce excessive drinking norms by allowing users to interact with and share them. This week, as part of our Special Series on Addiction and Social Media, The DRAM reviews a study by Sandra Jones and colleagues examining the relationship between alcohol brand interaction on Facebook and increased drinking in young people.

What was the research question?
Is there a relationship between engagement with alcohol brands on Facebook and heavier drinking?

What did the researchers do?
The researchers surveyed 283 Australian adolescents and young adults who used Facebook at the time. All respondents were 16 to 24 years old (the legal drinking age in Australia is 18). Respondents provided estimates for the amount of time they spent on Facebook and their number of Facebook friends. The survey also asked respondents if they saw any alcohol-branded content on Facebook in a typical week, if they had ever interacted with Facebook content from alcohol brands, and how they interacted with the brands’ Facebook presence. Lastly, the survey measured number of drinks consumed in a typical drinking day, number of drinking days per month, and number of binge drinking occasions per month. Jones and colleagues conducted chi-square and logistic regression tests to determine the relationship between Facebook use, alcohol content interaction, and drinking.1

What did they find?
Of all participants, 21% had ever visited an alcohol brand’s Facebook page (one in ten of whom were under 18-years-old). Participants who had interacted with alcohol brands on Facebook (liking, commenting, posting on a brand’s page, or uploading or tagging a photo showing alcohol products) on average consumed alcohol significantly more frequently and in heavier amounts (including more occurrences of binge drinking) than participants who had never interacted with alcohol brands on Facebook (see figure). Time spent on Facebook per week and number of Facebook friends were not associated with drinking frequency or amount. 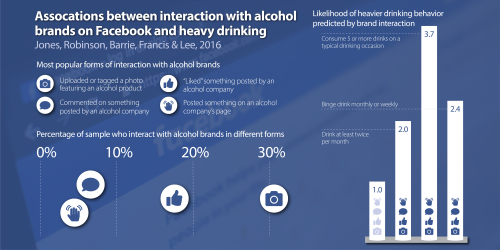 Why do these findings matter?
These results provide evidence that interacting with alcohol-branded Facebook pages and making alcohol-related posts are closely related to heavier drinking in youths. Though a minority of participants actually reported interacting with alcohol brands, all users can potentially see alcohol-related interactions posted by friends and popular influencers, and underage users can easily lie about their age to access restricted pages. While these findings speak to a lack of regulation on this form of marketing, it’s also important to note that this study was conducted in 2013, and Facebook is currently losing popularity with young people. Future research could investigate whether this relationship still exists between alcohol brands and users on social networking platforms that have become more popular with young people, such as Instagram and Snapchat.

Every study has limitations. What are the limitations in this study?
The researchers derived their results from a convenience sample and a relatively small sample , decreasing statistical power and increasing the odds of a Type I error. Also, the sample consisted of only young Australian Facebook users, so findings might not generalize to social media users of different ages or in other countries.

Posted at 06:00 AM in Special Series, The Drinking Report for Addiction Medicine (DRAM) | Permalink