« Introduction to the Special Series on Addiction and Social Media | Main | Social media and addiction: How a tool for communication can make us feel our needs for social connection are being met »

In 2018, 18% of college students reported having used an illicit drug other than marijuana in the previous year, a rate that is higher than other age groups. These students, and other people their age, might be experimenting with social media apps as a new method for buying and selling drugs. This week, as part of our Special Series on Addiction and Social Media, STASH reviews a study by Leah Moyle and her colleagues looking at how social media applications are currently being used to facilitate drug transactions.

What was the research question?
What are common practices and motivations for using social media apps to access drugs?

What did the researchers do?
Researchers used three data collection methods to better understand how people are using apps to access drugs: (1) an online survey of 358 drug users recruited from an advertisement posted on an Internet forum1 for people interested in drug use, (2) a rapid in-person interview conducted with 20 drug users, and (3) in-depth interviews with 27 drug users. The survey provided quantitative data regarding the demographics of those accessing drugs on social media and information about typical social media-based drug purchases. The interviews yielded qualitative information regarding the perceived benefits of, motivations for, and barriers to using apps to access drugs. Participants ranged in age from 18 to 60 but the most common age was 18.

What did they find?
Of the 358 participants surveyed, 288 had used apps, such as Snapchat, Instagram, and WhatsApp, to access drugs and 70 said that they had considered using this method. In addition, 84.3% of participants said they would use apps to access drugs in the future. Most commonly, participants reported using an app to access marijuana; 64.5% reported having done so. Smaller percentages of participants reported that they used apps to access LSD, ecstasy/MDMA, psychedelic mushrooms and cocaine (see Figure). The most commonly reported benefit of using apps was the convenience of transactions (78.8% of the sample), followed by the quick process of app-facilitated drug purchases (58.6%). The interviews revealed that though participants felt the apps were safer than other ways of buying drugs, many held the mistaken belief that they could assess the quality and safety of drugs they were buying by looking at photos on the apps. 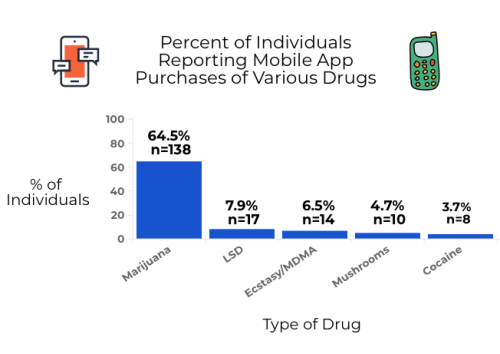 Figure. Percentage of individuals who had accessed a variety of drugs using social media applications. Click figure to enlarge.

Why do these findings matter?
With one half of teenagers stating that they feel like they are addicted to their phones, it is possible that the use of smartphone-based apps to access drugs will continue to increase. In addition, with 95% of teens in the United States saying that they have a smartphone or have access to a smartphone, it is important that parents are aware of the risks of social media. For those who are already purchasing drugs on apps or are considering using apps to access drugs in the future, they should be conscious of the fact that the apps do not actually provide more safety.

Every study has limitations. What are the limitations of this study?
This study used convenience samples, including people who visit a drug-focused Internet forum. So, it is unlikely that the results are generalizable to the population of drug users more broadly

Posted at 03:22 PM in Science Threads on Addiction, Substance Use, and Health (STASH), Special Series | Permalink