ASHES, Vol. 15(10) - Can social media be the answer to quitting smoking? The effects of a social media campaign on young adult smoking cessation

Social media platforms are extremely popular in the United States and worldwide. While social media has been implicated in increasing rates of depression and excessive internet use among young adults, it might also help people manage addictive behaviors. This week, as part of our Special Series on Addiction and Social Media, ASHES reviews a study by Neill Baskerville and colleagues that examined how a social media campaign influenced the chance of successfully quitting smoking.

What did the researchers do?
The researchers recruited 238 young adult smokers from Canada to take a survey and participate in a program to quit smoking. They exposed1 102 participants to a social media-based smoking cessation program and 136 participants to a helpline cessation program. Using logistic regression models and controlling for several potential confounders2, they analyzed how the two types of smoking cessation programs influenced: 1) attempting to quit smoking3, 2) quitting smoking for 7 consecutive days; and 3) quitting smoking for 30 consecutive days. 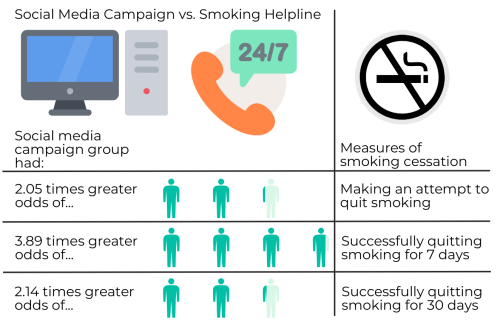 Figure: Odds of making a quit attempt and successfully quitting smoking for 7 and 30 days for two types of smoking cessation programs. Click on figure to enlarge.

Why do these findings matter?
While much of the focus of research on social media has examined potential adverse effects, this study shows that using social media to help people quit smoking might work better than at least one conventional method (i.e., a smoking helpline). These findings are important because this technological approach to reducing smoking could be extended to other types of addictive behaviors. Other studies have found social media campaigns to be successful in reducing stigma related to mental health issues and for recruiting high-risk substance users for research, suggesting that social media has promise for enhancing addiction treatment and research.

Every study has limitations. What are the limitations in this study?
As the researchers used self-reported survey data on smoking cessation, this measure may not accurately measure actual smoking behavior. The study sample was relatively small and was not nationally representative, so these results are not likely to generalize to all smokers.

For more information:
SmokeFree offers tools and tips about quitting and maintaining abstinence from smoking. The Centers for Disease Control and Prevention provides research and tips about cigarettes and how to quit. For evidence-based information about the health effects of smoking cigarettes, read this page hosted by the American Cancer Society.

1. This study used a quasi-experimental design, without randomly assigning participants to each type of smoking cessation program. Although the authors compared the demographics of the groups and adjusted for group differences, their results are likely not as accurate as a controlled experimental design.

2. To ensure that other potential variables that could be associated with quitting smoking did not influence their results, the authors controlled for education level, frequency of cigarette use, and ethnicity based on a survey administered to participants at the beginning of the study.

3. The authors measured “making a quit attempt” as successfully stopping smoking for 24 or more consecutive hours during the study period.