« ASHES, Vol. 15(11) - The role of flavors in vaping initiation, satisfaction, and addiction. | Main | The WAGER, Vol. 24(12) - What are the most important risk factors that predict gambling problems? »

STASH, Vol. 15(11) - Mapping the opioid epidemic in Massachusetts: How prescribing practices relate to the incidence of fatal opioid overdoses between 2011-2015

Opioid overdoses have increased in the past decade in the United States, leading some public health experts to declare an “epidemic” of deaths due to opioids. Massachusetts is one of the states that has been hit especially hard by fatal opioid overdoses (see figure for comparison across states). Research suggests that potentially inappropriate prescribing (PIP) practices,1 such as obtaining opioid prescriptions from multiple pharmacies and being prescribed excessive doses of opioids, could contribute to overdoses. This week, STASH reviews a study by Thomas J. Stopka and colleagues that examined how PIP practices could be related to fatal opioid overdoses in Massachusetts cities and towns between 2011 and 2015. 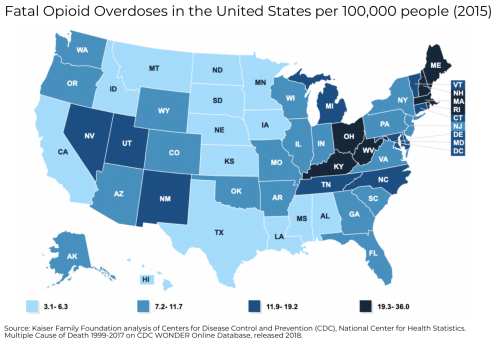 Figure: Fatal opioid overdoses in the United States per 100,000 population for the year 2015. Estimates are age-adjusted. Click on figure to enlarge.

What was the research question?
What is the relationship between PIP practices and fatal opioid overdoses in Massachusetts?

What did the researchers do?
The researchers examined data from 2011-2015 on six measures of PIPs2 and fatal opioid overdose rates across 538 ZIP codes3 in Massachusetts. The study population was all Massachusetts residents 18 and older who were prescribed at least one opioid between 2011 and 2015, excluding anyone who had late-stage cancer. They first used descriptive statistics to examine the change in opioid overdoses over time to determine if rates were increasing during the study period. Next, the authors created GIS maps to show how PIPs and opioid overdoses are geographically distributed across the state and how the two might cluster together in nearby locations.

What did they find?
Doctors prescribed at least one opioid drug for more than half of the adult population (i.e., 3,143,817 people) in Massachusetts in the 2011-2015 period. The majority of ZIP codes in Massachusetts experienced an increase in overdose deaths during the study period (click here for original maps from study). Three measures of PIP were prevalent in places with more fatal opioid overdoses: obtaining opioid prescriptions from 4+ different prescribers, obtaining high dosage prescriptions, and receiving opioid prescriptions with no pain diagnosis (click here for hotspot maps). Similar, yet weaker, results were found for two other measures of PIP: making cash payments for opioid prescriptions and the co-prescription of opioids and benzodiazepines.

Why do these findings matter?
The findings can inform targeted public health interventions in communities with high opioid overdose death rates. For example, free addiction treatment as part of a Medicaid expansion and expanded access to Naloxone (i.e., an opioid overdose-reversing drug) led to substantial decreases in opioid-related fatalities in Ohio. Massachusetts could experience similar improvements with such policies. This study also suggests that safeguards against specific problematic prescribing practices could be effective. A similar approach in Florida that instituted strict prescribing restrictions and a prescription drug monitoring program saw declines of over 50% in opioid deaths in the year after the interventions were implemented.

Every study has limitations. What are the limitations in this study?
The study sample was limited to the state of Massachusetts and was not nationally representative, so these results might not generalize to all ZIP codes in the United States. Moreover, the use of administrative data only allowed the authors to examine the outcome of opioid-related deaths, even though other outcomes such as non-fatal overdoses or opioid dependence rates could be important measures of harm.

1. The concept of PIP practices refers to both actions by prescribers (e.g., dispensing excessive doses of opioids) and actions by patients (e.g., visiting multiple pharmacies for opioid prescriptions during a short time period). For more information about the importance of safe prescribing practices for opioids, check out this resource page from the U.S. Department of Health and Human Services.

3. The authors created their dataset from sixteen administrative datasets by first examining individual-level data on the percentage of people who experienced each of the six types of PIPs. Next, they used these data to calculate the average for each of the six PIPs for each ZIP code and then linked the PIP ZIP code data with data on the number of fatal opioid overdoses in each ZIP code during the same time period.

Posted at 09:51 AM in Science Threads on Addiction, Substance Use, and Health (STASH) | Permalink