« What’s Next in Open Science for the Division on Addiction? | Main | ASHES, Vol. 15(11) - The role of flavors in vaping initiation, satisfaction, and addiction. »

The DRAM, Vol. 15(11) - Social Anxiety Disorder and Alcohol Use Disorder: A common cocktail?

Individuals often turn to alcohol as a means of relieving stress. Alcohol is commonplace at social gatherings, so those with social anxiety disorder (SAD) may be at risk for developing alcohol use disorder (AUD) in order to cope with these stressful situations. In fact, about one in four adults with AUD have SAD. Though this self-medication explanation seems plausible, it could also be that broad risk factors--including a vulnerability to anxiety in general--produce both SAD and AUD. This week, the DRAM reviews a study by Fartwin Torvik and his colleagues that investigated the nature of the relationship between SAD and AUD.

What was the research question?
Does SAD have a unique association with AUD beyond that of anxiety disorder in general? Does a history of SAD put someone more at risk for AUD?

What did the researchers do?
Data on 2,284 adult Norwegian twins were pulled from the Norwegian Institute of Public Health Twin Panel (NIPHTP). The twins were assessed for AUD, SAD, generalized anxiety disorder, panic disorder, agoraphobia and specific phobias using the Composite Diagnostic Interview between 1999 and 2004 (T1) and between 2010 and 2011 (T2). Using biometric modelling involving other data from the NIPHTP, the researchers were able to control for environmental and genetic influences.

What did they find?
All disorders at T1 were associated with the same disorder at T2. For example, someone with panic disorder at T1 was likely to have panic disorder at T2. However, SAD at T1 was the only anxiety disorder that was associated (r = 0.25) with AUD at T2. The association remained even after the researchers controlled for confounding environmental and genetic risk factors. This suggests, but does not prove, a causal influence of SAD in the development of AUD. Interestingly there is also a small, but significant correlation (r = 0.11) between AUD at T1 and other anxiety disorders and T2. 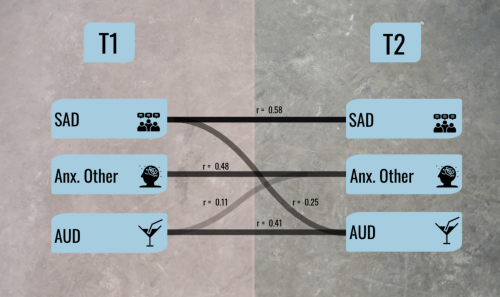 Figure: Significant associations between measured disorders at T1 and T2. Strength is approximated by the darkness of the line. Anx. Other represents the other anxiety disorders that are not SAD (i.e. generalized anxiety disorder, panic disorder, agoraphobia and specific phobias). Click figure to enlarge.

Why do these findings matter?
These findings are compelling evidence that treatment of any social anxiety disorder could be an integral component in the prevention of AUD. Healthcare providers can use this information to mark patients with SAD as having higher risk for development of AUD and eventually develop interventions to thwart this evolution, like teaching people ways to cope with social stress that don’t involve alcohol. The association between AUD at T1 and other anxiety disorders and T2 highlights the further problems that arise after someone develops AUD.

Posted at 02:10 PM in The Drinking Report for Addiction Medicine (DRAM) | Permalink