« ASHES, Vol. 15(10) - Can social media be the answer to quitting smoking? The effects of a social media campaign on young adult smoking cessation | Main | The WAGER, Vol. 24(11) - Can't stop, won't stop: The role of impulsivity in gambling disorder »

Lifetime prevalence of heroin use among 12th graders in the United States has been declining since 2010. Though this is a promising finding, we know from other studies that when you look at specific segments of the population (defined by race, age, geography, and other factors), the story often looks much different. This week, STASH reviews a study by Sherri-Chanelle Brighthaupt and her colleagues that examined the prevalence of adolescent lifetime heroin and injection drug use in major American cities.

What was the research question?
How did the lifetime prevalence of heroin and injection drug use (IDU) change among high school students in major American cities from 1999 to 2017?

What did the researchers do?
Brighthaupt et al. used data from the Youth Risk Behavior Survey (YRBS), a national school-based survey that assesses health behaviors including adolescent substance use. They analyzed data from nine urban school districts.1 The researchers completed logistic regression analysis to assess how the prevalence of lifetime heroin and IDU use changed in each urban school district over time. 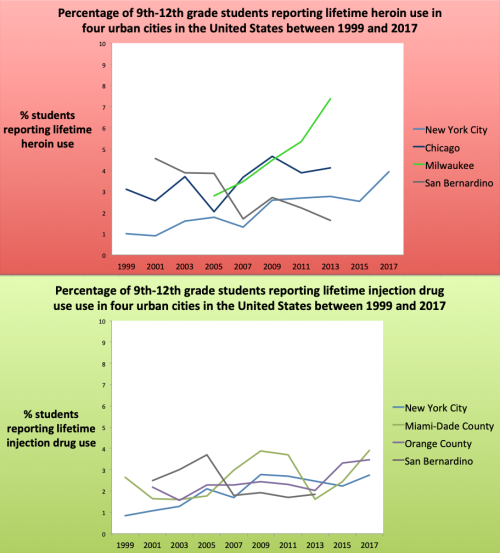 Figure. Percentage of high school students in urban school districts in the United States showing significant linear increases or decreases in lifetime heroin and injection drug use from 1999 to 2017. Figure adapted from Brighthaupt et. al (2019). We use a narrow range on the y-axis so that readers can detect trends over time. Click on figure to enlarge.

Why do these findings matter?
This study demonstrated that national trends in adolescent lifetime heroin and IDU use masks rising use in some major American cities. It is important for public health workers to know in which cities adolescent heroin and IDU use is increasing so that they can develop and deploy targeted, culturally competent interventions. In addition, looking at San Bernardino, a city where both heroin and IDU use has been decreasing, might be very helpful in understanding what factors in urban areas are protective against drug use. These findings also provide a foundation for future research into what factors in these urban areas are contributing to adolescent drug use.

Every study has limitations. What are the limitations of this study?
The YRBS is administered in schools, therefore students who were absent or who had dropped out of school would not have been included in the survey. Since students who have dropped out of school or miss school frequently are more likely to be using drugs, it is possible that the present study underestimated the lifetime prevalence of heroin and IDU use. In addition, the YRBS did not measure nonmedical prescription opioid use (NMPO) until 2017, so the relationship between NMPO and heroin/IDU was not assessed.

Posted at 12:35 PM in Science Threads on Addiction, Substance Use, and Health (STASH) | Permalink