« The DRAM, Vol. 15(12) - Family history of alcoholism is associated with brain activation to a rewarding stimulus | Main | STASH, Vol. 15(12) - From childhood maltreatment to substance use: The role of attachment style in this relationship »

ASHES, Vol. 15(12) - Can the course of ADHD progression influence an individual’s risk for developing Nicotine Dependence?

Attention Deficit/Hyperactivity Disorder (ADHD) is often diagnosed in children characterized by problems with inattention and/or hyperactivity/impulsivity. ADHD is also associated with an increased risk for developing problems with nicotine and other substances. People vary in their experience of ADHD, with some having persistent symptoms and others having symptoms only relatively early or relatively late. This week, ASHES reviews a longitudinal study by Shahrzad Ilbegi and colleagues investigating whether the course of progression of ADHD is associated with an increased risk for developing Nicotine Dependence (ND).

What was the research question?
Are individuals with particular courses of progression of ADHD from childhood through early young adulthood at greater risk of developing ND?

What did the researchers do?
Participants (N = 189) were a subsample of a European cross-sectional study looking at genetic and phenotypic profiles of individuals with ADHD. The sample included children with clinically diagnosed ADHD, their siblings, and healthy controls. Initial assessment (wave one) of the children took place between 2003 and 2006. Researchers followed participants for a ten-year period and assessed them through clinical interviews in three more waves. At the final wave, they divided participants into groups based on the course of their ADHD: persistent (meeting full diagnostic criteria at baseline and at wave four), remittent (meeting full diagnostic criteria at baseline but not at wave four), late-onset (siblings of children diagnosed with ADHD at baseline who did not meet any diagnostic criteria at wave one/before age 12 but did at wave four), unaffected siblings, and healthy controls. They assessed Nicotine Dependence by questionnaire at wave four and used survival analysis to determine differences in the risk of developing ND between the groups.

What did they find?
Participants with late-onset ADHD had the highest risk for nicotine dependence at wave four, followed by pesisters (see figure). Not surprisingly, healthy controls had the lowest risk. Though the prevalence varied among all the ADHD groups, the only statistically significant difference was between the late-onset group and health controls. 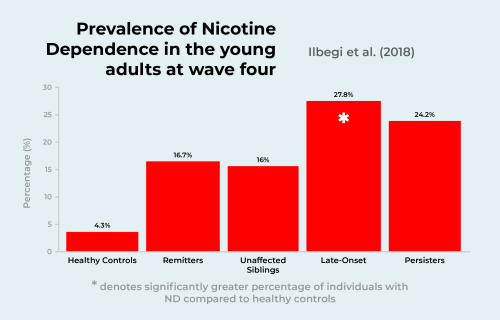 Figure: Percentage of individuals in each group who developed Nicotine Dependence. Click image to enlarge.

Why do these findings matter?
This research suggests that the course of progression of ADHD during childhood and adolescence is associated with an increased risk of developing ND. In particular, people with late-onset and persistent courses of ADHD had the greatest risk of ND, just as they have the greatest risk of other negative outcomes like social isolation and poor school and work performance. Given that primary care physicians are among the first lines of defense against the development of nicotine dependence, physicians working with children and young adults with ADHD should consider screening these patients and their siblings for ND, especially those with late-onset or persistent ADHD. Early screenings can help facilitate early treatment and recovery.

Every study has limitations. What are the limitations in this study?
Sample sizes were small within each group. Detecting statistically significant group differences is more difficult given the small samples. Additionally, the researchers used ND diagnostic criteria for adults even though not all of the subjects had reached adulthood at that point. This may have influenced the estimates of prevalence.