« The WAGER, Vol. 24(12) - What are the most important risk factors that predict gambling problems? | Main | ASHES, Vol. 15(12) - Can the course of ADHD progression influence an individual’s risk for developing Nicotine Dependence? »

The DRAM, Vol. 15(12) - Family history of alcoholism is associated with brain activation to a rewarding stimulus

Dysfunction in the brain’s reward system response, and familial history of alcoholism, each increase the risk for problem drinking. Is it possible that these factors exert their effects not just in isolation, but in conjunction? In other words, is someone with a family history of alcoholism more likely to have an exaggerated brain response to rewarding stimuli? This week, the DRAM reviews a study by William J.A. Eiler II and his colleagues that explores this question.

What was the research question?
Do brain regions important in reward and gustation respond differently to a rewarding stimulus based on familial history of alcoholism?

What did the researchers do?
Seventy-four healthy men and women were recruited and assessed for alcohol use via the SSAGA and AUDIT surveys. Half of the 74 participants had a family history of alcohol use disorder (designated “FHP” for “family history positive”) and half did not (designated “FHN” for “family history negative”). Eiler and his colleagues used fMRI to measure brain activity after the administration of a rewarding stimulus. The researchers chose two different concentrations of sucrose as the rewarding stimulus: one high (approximately 2.5 times the sweetness of Coca-Cola Classic) and one low. They examined whether FHP participants exhibited different brain activation than FHN participants in response to the sucrose. In these analyses, they controlled for the demographics and self-reported drinking behavior of their participants.

What did they find?
As expected, they found that compared to drinking water, drinking the sucrose solution generated vigorous activation in select brain regions that mediate reward and gustation (Gustatory complex, ventral insula, amygdala and ventral striatum). When controlling for group differences in drinks per week, they found that FHP participants showed significantly more activation to the low-sucrose concentration drink than FHN participants in their amygdala bilaterally. The family history groups responded to the high sucrose concentration in the same way. 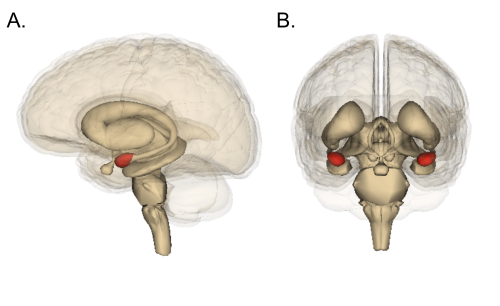 Figure: A sagittal (A) and coronal (B) view of the amygdala which is highlighted in red.

Why do these findings matter?
Having a parent with an alcohol use disorder increases the risk for having an alcohol use disorder. But why? This study demonstrated a difference in response of the amygdala between groups in response to a rewarding stimulus. This is significant as the amygdala plays an important role in coding the intensity of a stimulus. This likely goes beyond sweet taste, suggesting these two populations may demonstrate a difference in reward sensitivity in general through differential activation of the amygdala. While more investigation is necessary, this hints at one possible physiological contributor to the family history effect.

Every study has limitations. What are the limitations in this study?
The difference in brain activation was not seen at the higher dose. This suggests there may be a ceiling effect, in which the concentration was so strong it was either no longer rewarding or all participants had the maximum brain response making it difficult to distinguish differences between groups. More intermediate doses would have helped highlight the differences between family history groups or lack thereof.

Posted at 01:10 PM in The Drinking Report for Addiction Medicine (DRAM) | Permalink

The conclusions drawn from this study reflect a basic failure to understand the nature of addiction. Drug addictions such as alcoholism are regularly substituted for with non-drug behaviors such as compulsive gambling, eating, even compulsive housecleaning. Compulsive activities serve a psychological purpose and are as treatable by psychological approaches as well as any other psychological symptom. The desperation and despair of those trying to end their compulsive behavior obviously cannot be explained by having a somewhat higher pleasure receptivity. Indeed, for those who look for it, there is always a psychological precipitant to new compulsive/addictive actions, a theme that can be learned by those suffering with the symptom. Sadly, the focus on finding a pleasurable basis for compulsive/addictive behavior arises not just from failure to understand the psychological basis of these behaviors but also from the ancient idea that "addicts" are essentially hedonistic, pleasure-seeking individuals -- a moralistic view that is manifestly untrue and we would do well to discard.