Drinking during pregnancy poses serious health risks to the fetus and can result in fetal alcohol spectrum disorders, miscarriage, and still birth. Despite these established consequences, between 15 and 20 percent of women drink alcohol at some point during their pregnancy. However, certain women may be at higher risk for drinking during pregnancy than others. This week, the DRAM reviews a study by Dvora Shmulewitz and Deborah S. Hasin where they looked for indicators of women who are more likely to drink during their pregnancy.

What was the research question?
What are the risk factors for past-month alcohol use and binge drinking in pregnant women, and do these risk factors differ by pregnancy stage?

What did the researchers do?
The researchers used data on pregnant women between the ages of 15 and 44 years old from the National Survey on Drug Use and Health from 2002 to 2017. This survey included items on past thirty-day alcohol use, past thirty-day binge drinking, and questions about sociodemographics. It also included items related to health and the pregnancy. Shmulewitz and Hasin used logistic regression analysis to test the association between each of the sociodemographic and clinical risk factors and any past-month alcohol use or past-month binge drinking. For each of these associations, they performed another regression to account for pregnancy stage to see if the risk factors differed by pregnancy stage.

What did they find?
Among all pregnant women, the prevalence of past-month alcohol use was 9.9% and past-month binge drinking was 3.4%. Women who were between the ages of 15 and 17, had greater than a high school education, were previously married or never married (compared to being currently married), had comorbid depression, or recently used tobacco, marijuana, cocaine or any other drug were more likely to report past-month drinking. When the researchers factored in the women’s pregnancy stage, they found that marijuana use was a greater predictor of drinking during middle/late pregnancy than early pregnancy. Women who were previously or never married, had comorbid depression or alcohol use disorder (AUD), or recently used substances were at highest risk for past-month binge drinking (see Figure). 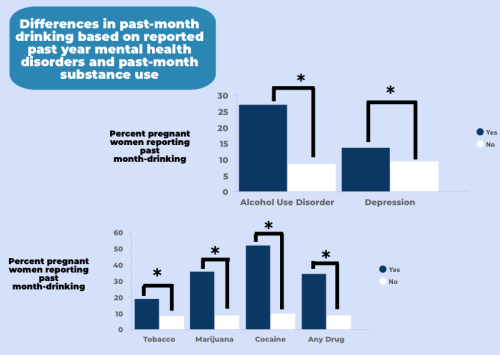 Why do these findings matter?
Drinking during pregnancy poses serious health risks for the fetus. It is therefore important that physicians discuss with their patients the risks associated with alcohol and other substance use during pregnancy. Those who screen positive for AUD should receive extra treatment and counseling, so they can learn how to safely cut down their drinking. Identifying and addressing any issues with depression is also important, since it may impact substance use and should be addressed with further treatment. For example, the “Reach Out, Stay Strong, Essentials for New Moms (ROSE)” program reduces the risk of postpartum depression among low-income women by half and can be administered in prenatal clinics by nurses, midwives, or anyone trained to follow the program’s manual.

For more information:
For more details about addiction, visit our Addiction Resources page.

Posted at 06:30 AM in The Drinking Report for Addiction Medicine (DRAM) | Permalink