« STASH, Vol. 15(12) - From childhood maltreatment to substance use: The role of attachment style in this relationship | Main | The DRAM, Vol. 15(13) - Alcohol use during pregnancy: Who is at greatest risk? »

Like most forms of addiction, gambling disorder is stigmatized by the general public, which discourages help-seeking and treatment among those suffering. We tend to associate gambling with casinos, but gambling comes in many forms. Could social stigma against people experiencing problem gambling differ by form of gambling? This week, The WAGER reviews a study by Samuel Peter and colleagues about social stigmatization of people experiencing problems with eSports gambling, an increasingly popular gambling form in which players bet on the outcomes of video game tournaments.

What did the researchers do?
Peter and colleagues recruited 504 participants from the United States to take an online survey. In the survey, each participant first read one of four randomly-chosen vignettes about a young White man experiencing either (1) a casino gambling problem, (2) an eSports gambling problem, (3) an Internet gaming problem, or (4) a financial crisis from taking out a large loan (the control condition). In all vignettes, the man expressed symptoms seen in gambling disorder (e.g., feeling distressed, lying about the extent of his behavior, losing his job). Participants then answered questions assessing their stigma level toward the man and desired social distance from the man.1 The researchers used analysis of variance and covariance to test if certain gambing behaviors were more stigmatized than others. 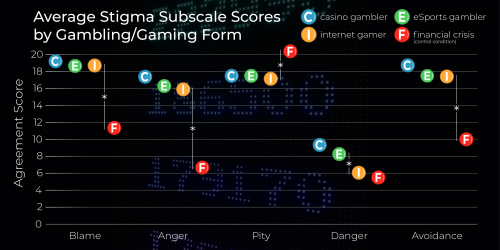 Figure: Average scores for perceived stigma, displayed by gambling/gaming form presented in the vignette. The higher the agreement score, the more participants felt the emotion toward the man. Asterisks denote significant differences. Click image to enlarge.

Why do these findings matter?
Stigma associated with casino gambling likely extends to eSports gambling and Internet gaming disorder. Since these problems scored higher than a financial crisis caused by risky financial decisions unrelated to gambling, stigma felt toward gambling and gaming problems is not entirely due to financial trouble. Describing problems as “disorder” could account for increased stigma; it’s why some people want to change the term “post-traumatic stress disorder” to “post-traumatic stress injury.” Reducing addiction-related stigma is a monumental but crucial task; it requires empathy, compassion, and the understanding that loss of control is a central feature of the condition, rather than a moral failure.

Every study has limitations. What are the limitations in this study?
The subject of the vignettes was a young White man, which likely affected participants’ interpretation of the situation. Future studies can present vignettes with a different character experiencing different gambling-related issues. The researchers used Amazon Mechanical Turk to administer their survey. In addition to the limitations of self-reporting, Mechanical Turk has its own biases.

Posted at 09:50 AM in The Worldwide Addiction Gambling Education Report (The WAGER) | Permalink