What did they find?
During the simulated menthol-cigarette ban period, half the sample admitted to buying and smoking at least one menthol cigarette. However, although they could smoke as many non-menthol cigarettes as they wanted, they smoked fewer (on average) per day, compared to when they smoke menthol cigarettes (see figure). They also self-reported lower levels of smoking satisfaction and nicotine dependence. Additionally, Black smokers had greater reductions in cigarettes per day than non-Black smokers. 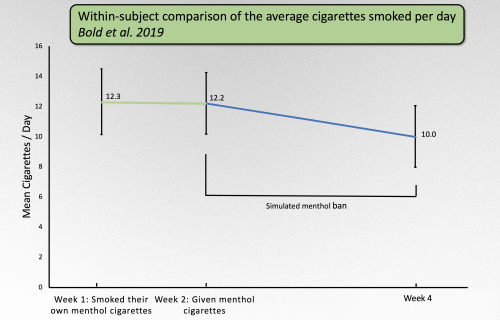 Figure: Mean number of cigarettes smoked over the course of the study. The vertical lines show the 95% confidence interval. It is important to note that this graph only shows three of the four measurement points and the connecting lines are not necessarily linear. The drop in mean cigarettes smoked from Week 2 to Week 4 was statistically significant. Click the image to enlarge.

Why do these findings matter?
The results of this study suggest that a ban on menthol cigarettes could potentially decrease the prevalence of smoking, both in terms of the amount of smoking among smokers and the number of smokers due to its addictive nature. A menthol-ban may be especially effective for Black smokers who have historically been the target of menthol advertising campaigns.

Every study has limitations. What are the limitations in this study?
This was only a simulated ban, and half of the participants reported a clear deviation from what an actual ban would allow. The study only assessed cigarette behavior for two weeks. It is unclear if these promising results would continue as time passed and the participants potentially adjusted to the new type of cigarette, potentially through a mere-exposure effect.

For more information:
SmokeFree offers tools and tips for quitting and maintaining abstinence from smoking tobacco.